The Gospel of Change: Infanticide 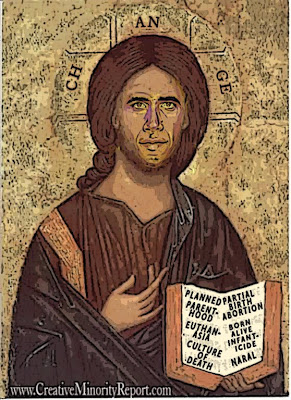 Senator Rick Santorum has an op-ed in the February 28th Philadelphia Inquirer in which he gives us the truth behind the “Gospel of Change”. The kind of change the Obamessiah would like to see is a culture where babies that survive abortion can be killed, no questions asked. That is right, infanticide.

[Phil. Inquirer]Fighting on the fringe with a handful of liberals is one thing, but consider his position on an issue that passed both houses of Congress unanimously in 2002.

That bill was the Born Alive Infants Protection Act. During the partial-birth abortion debate, Congress heard testimony about babies that had survived attempted late-term abortions. Nurses testified that these preterm living, breathing babies were being thrown into medical waste bins to die or being “terminated” outside the womb. With the baby now completely separated from the mother, it was impossible to argue that the health or life of the mother was in jeopardy by giving her baby appropriate medical treatment.

The act simply prohibited the killing of a baby born alive. To address the concerns of pro-choice lawmakers, the bill included language that said nothing “shall be construed to affirm, deny, expand or contract any legal status or legal right” of the baby. In other words, the bill wasn’t intruding on Roe v. Wade.

Who would oppose a bill that said you couldn’t kill a baby who was born? Not Kennedy, Boxer or Hillary Rodham Clinton. Not even the hard-core National Abortion Rights Action League (NARAL). Obama, however, is another story. The year after the Born Alive Infants Protection Act became federal law in 2002, identical language was considered in a committee of the Illinois Senate. It was defeated with the committee’s chairman, Obama, leading the opposition.

Let’s be clear about what Obama did, once in 2003 and twice before that. He effectively voted for infanticide. He voted to allow doctors to deny medically appropriate treatment or, worse yet, actively kill a completely delivered living baby. Infanticide – I wonder if he’ll add this to the list of changes in his next victory speech and if the crowd will roar: “Yes, we can.”

How could someone possibly justify such a vote? In March 2001, Obama was the sole speaker in opposition to the bill on the floor of the Illinois Senate. He said: “We’re saying they are persons entitled to the kinds of protections provided to a child, a 9-month child delivered to term. I mean, it would essentially bar abortions, because the equal-protection clause does not allow somebody to kill a child.” So according to Obama, “they,” babies who survive abortions or any other preterm newborns, should be permitted to be killed because giving legal protection to preterm newborns would have the effect of banning all abortions.