Fr. McCartney on the Giuliani Debacle 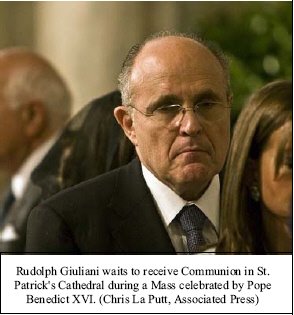 Reprinted from the Pastor’s Page of St. Matthew Church in Dix Hills NY

A Catholic news story has developed over the last several days which merits our attention. The story has its origin in the Mass offered by Pope Benedict at St. Patrick’s Cathedral two weeks ago in New York. Various dignitaries and public officials, Catholic and non-Catholic alike, were invited to attend the various Papal events. This is standard practice at such things. However, during the Mass at St. Patrick’s, Rudolf Giuliani, the former Mayor of New York, was seen and photographed receiving Holy Communion. When he emerged from the cathedral a reporter asked him specifically about this and the former mayor confirmed that he had received Communion. This story was then picked up by the news media at large. The following day Newsday ran an article about it.

On Monday of last week, political columnist Robert Novak (a convert to Catholicism from Judaism) wrote an article on the topic. He raised the issue of the public scandal caused to the faithful by Catholic pro-abortion politicians receiving Holy Communion. A similar problem had occurred during the Papal Mass at Nationals Stadium in Washington, D.C., where other pro-abortion Catholic politicians had even announced beforehand that they intended to receive Holy Communion.

Mr. Novak pointed out that there were many other Catholics who would have loved to have attended a Papal Mass, but were denied for lack of seats. Was it right then, that those who publicly reject Church teaching should be given the honor of attending the Pope’s Mass?

John Allen, the well-known Vatican correspondent for the National Catholic Reporter, concluded that these incidents during the recent Papal visit had clearly encouraged the notion that pro-abortion Catholic politicians are eligible to receive Communion. However, in 2004, then Joseph Cardinal Ratzinger told the American bishops that Catholic politicians who publicly support abortion are in a state of serious sin and may not receive Holy Communion. The Vatican has recently reasserted that there has been absolutely no change in the Pope’s or the Church’s position on this issue. Sean Dolan, spokesman for the Diocese of Rockville Centre, said that our diocese adheres to Church doctrine that prohibits abortion and added that any public official who advocates abortion should not receive Communion.

The Catholic Church clearly teaches that abortion is a grave offense against the will of God. Throughout my years as Archbishop of New York, I have repeated this teaching in sermons, articles, addresses, and interviews without hesitation or compromise of any kind. Thus it was that I had an understanding with Mr. Rudolph Giuliani, when I became Archbishop of New York and he was serving as Mayor of New York, that he was not to receive the Eucharist because of his well-known support of abortion. I deeply regret that Mr. Giuliani received the Eucharist during the Papal visit here in New York, and I will be seeking a meeting with him to insist that he abide by our understanding.

Mr. Giuliani is twice divorced. Although he received an annulment from the Church for his first marriage, he has not received one for his second. Consequently, he is divorced and remarried outside the Church. This is a serious sin, and no Catholic in such a state may receive Holy Communion. In addition, Mr. Giuliani has stated that he is not a practicing Catholic; in interviews he has said that he attends Mass only “occasionally” on Sundays and at funerals. Any Catholic who misses Mass on a Sunday or Holy Day of Obligation without sufficient excuse (such as illness, for example) has committed a grave sin and may not receive Holy Communion until he has gone to sacramental confession. To receive Holy Communion in a state of mortal sin brings no grace to the person; in fact, it adds the sin of sacrilege against the Blessed Sacrament to the other sins already committed.

For both of these reasons, Mr. Giuliani should not have received Holy Communion at Mass. However, what is interesting is that these were not the points Cardinal Egan mentioned in his statement on the issue.

The Cardinal referred only to Mr. Giuliani’s very public support for legal abortion as the disqualifying reason for him not to receive Communion. The Cardinal clearly wanted to teach the truth about this most important issue.

The Jews quarreled among themselves, saying, “How can this man give us [His] flesh to eat?” Jesus said to them, “Amen, amen, I say to you, unless you eat the flesh of the Son of Man and drink his blood, you do not have life within you. Whoever eats my flesh and thinks my blood has eternal life, and I will raise him on the last day…. Then many of his disciples who were listening said, “This saying is hard; who can accept it?” Since Jesus knew that his disciples were murmuring about this, he said to them, “Does this shock you?” … As a result of this, many [of] his disciples returned to their former way of life and no longer accompanied him. Jesus then said to the Twelve, “Do you also want to leave?” Simon Peter answered him, “Master, to whom shall we go? You have the words of eternal life. We have come to believe and are convinced that you are the Holy One of God.” [Jn 6:52-54; 60- 61; 66-69]

The Gospel of Jesus Christ is not something we vote on to determine whether we like it or not. It is not determined by a poll of how many Catholics would like it to change, to be made easier, more convenient, or softer. Jesus gave the Church His Gospel with the “Great Commission” to “teach them to observe all that I have commanded you.” [Mt 28: 20] We cannot pick and choose what we prefer to follow as Catholics. We must either accept the whole Gospel or reject the Gospel wholly.

A spokesman for the United States Conference of Catholic Bishops issued a statement before the Pope’s visit: “People go to church and people go to Communion if they feel in their heart they are prepared to receive Communion.” This in fact is terribly misleading. What people do and what they should do are two completely different things. When people approach the communion rail, the priest has no way of knowing whether they have committed a mortal sin that would bar them from receiving the Eucharist. The assumption must be made that the person has properly examined his conscience in light of the teachings of the Church, and knows whether he may receive Holy Communion or should refrain. It has nothing to do with a feeling; it has to do with knowing whether one is in a state of serious sin or not.

Cardinal Egan is the chief shepherd of New York. He has an obligation to preach the Gospel, and neither to add nor subtract from it. He must always defend the Church’s teaching on human life in the clearest terms. He may not permit those in the public eye to use their fame to deny what the Church teaches. At the same time, he is also responsible, as pastor, for the immortal souls of those individuals. It would be a terrible lack of love for a pastor to allow one of his flock to stray into serious sin and not to try with all his might to bring him back.

Imagine you go to the doctor for your annual check-up. The doctor does a full exam and various tests, which reveal a serious illness. However, the doctor chooses not to tell you the truth, because it might upset you. The illness then goes untreated and becomes worse, perhaps terminal. Obviously such a doctor would be rightly sued, and would probably even have his license revoked. A priest is exactly like a doctor in this case. When he sees a person in a state of sin, perhaps even in a state of ignorance as to what the Church teaches, he has a serious moral obligation to tell the individual the truth—even if that truth is unpleasant for both of them. If he does not, the shepherd becomes culpable for that person’s sin as well. At the end of his life, Cardinal Egan will be judged by Jesus Christ on his shepherding of souls under his care; he would be a bad shepherd if he did not do everything in his power to protect his flock.

Mr. Giuliani, through a spokesman, has said that he will meet with the Cardinal, but that this is a “private matter.” It certainly was a private matter until Mr. Giuliani freely chose to break his private agreement with Cardinal Egan by receiving Communion at a Papal Mass on national television.

The Catholic Church in the United States has for too long looked the other way on this issue. In consequence, the situation has become worse, and has caused much unnecessary confusion. Now, it seems, we are beginning to emerge from the fog into the light. Though more bishops across the country are now speaking out, we still have a long way to go. As Winston Churchill once said in another context: “This is not the end. It is not even the beginning of the end. But it is, perhaps, the end of the beginning.”