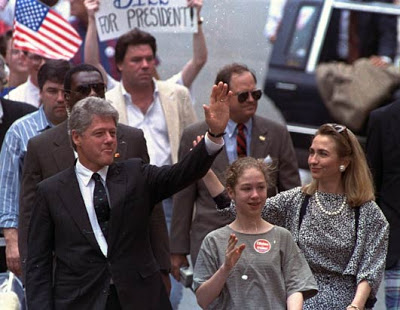 This is a little scrapbook I just put together of some family shots from candidates past. I’ve been reading a lot lately on how the 17 year old Palin daughter is “fair game” for the media because the Palin family has allowed the children to be photographed in a positive light (as if no other family ever allowed pictures of their families to be taken.) They say the campaign mentioned that Palin gave birth to a Downs Syndrome child. They say the campaign talked about how their son was shipping to Iraq. So for them, that makes it open season on the entire family.

Now, Hillary Clinton had Chelsea actually giving speeches on her behalf but the media still had a “hands-off” policy when it came to Chelsea.

This from the Boston Herald talking about Barney Frank:

“They’re the ones that made an issue of her family,” Frank, D-Mass., said Tuesday in a telephone interview with The Associated Press.

Roger Simon wrote in the Politico:

Sarah Palin wanted the media to report on her teenage son, Track, who enlisted in the Army on Sept. 11, 2007, and soon will deploy to Iraq.

Sarah Palin did not want the media to report on her teenage daughter, Bristol, who is pregnant and unmarried.

The media, I believe, has overplayed its hand. If you watch, they’re now defending themselves and pleading ignorance as to who brought this story up. They know they went too far by attacking a 17 year old girl, who I feel deeply sorry for.

And now the media is saying that they didn’t mean to cover the actual pregnancy or scandalize a young girl, they were just trying to cover the vetting process as a way of showing that McCain recklessly chose Palin. This, of course, is a lie. They attempted to destroy Sarah Palin and didn’t care that they were dragging an innocent 17 year old through the mud. We will not forget. As proof, look at this picture from Newsbusters.