Google Gives In and Becky Stands Up 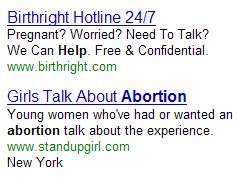 Did you know that up until yesterday if you typed the word abortion or abortion help, the one thing that you wouldn’t see was pregnancy help?

Up until yesterday, Google banned pro-life advertizing from their search engine. However, thanks to the efforts and legal challenge of a group called the Christian Institute, that has now changed. This change is not even just for the U.S. but worldwide.

[Times Online] Google had banned pro-life religious groups from buying adverts against search terms such as “abortion” and “abortion help” but was forced to abandon its policy after it was accused of breaching equalities legislation.

The challenge was brought by the Christian Institute, a cross-denominational pressure group, who said that Google’s change of heart was an acknowledgement of the rights of everybody to hold an opinion on the subject.

Mike Judge from the Christian Institute said: “Google were taking adverts from pro-abortion groups, and our view is that was a free speech issue. What we want to do is set out the acts in a pretty factual and pretty sensible way”.

Google had been taken to court by the Christian Institute earlier in the year, arguing that its policy was in breach of the Equalities Act of 2006. Initially, Google said it would fight in the courts, but changed its mind over the summer. Its new policy applies globally.

A quick Google search on “abortion help” yielded 8 advertisements. Two of the eight were pro-life. The fantastic Birthright and an ad that was not immediately clear as prolife for a site called Stand Up Girl. I followed the link and what I found fascinated me. The site is run by a young woman named Becky who talks about her own crisis pregnancy. She advises young women to stop and take a timeout. On the site she has testamonials and letters from other women who have found themselves in this situation. But most importantly, she offers help with answers to scary questions and links to resources to help the young mother in crisis.

I think that sites and services like this are absolutely crucial in the effort to save as many babies and their mothers from making a horrible choice. Thank God for Becky and all the others out there every day working with and for the young moms and saving lives.

Thanks to the Christian Institute and Becky for standing up. May God bless you.