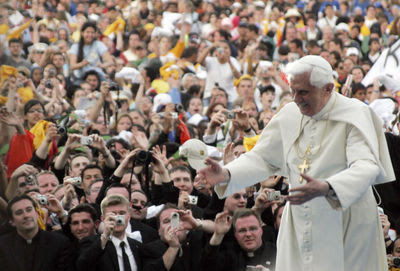 Researchers studying emergency inpatient records at Sydney’s hospitals over the five-day event in July described the pilgrims’ low rate of serious hospitalisations as “exemplary”. In fact, St Vincent’s emergency department director said the religious nature of the event “may have played a role”. Ya’ think? How else to describe the incredible difference between Youth Day and say…Woodstock:

Woodstock: A common diagnosis was overdose.
Youth Day: The most common diagnoses were lower limb strain or sprain, infections, and acute asthma.

Woodstock: 3 Deaths. One from a heroin overdose, one from a ruptured appendix, and one from some dude passing out in a nearby field and getting run over by a tractor. Ouch.
Youth Day: Zero deaths.

Woodstock – Three tracheotomies performed. Not really sure I understand why that was happening but there’s a lot I don’t understand about Woodstock.
Youth Day – Miraculously, no tracheotomies reported. Man, how do you get through three days without tracheotomies?

Woodstock – 80 lawsuits filed after the festival.
Youth Day – O lawsuits but Fr. Richard McBrien may still be considering one having to do with female ordination. Not sure.

Woodstock: 30,000 sandwiches distributed by the Sisters of the Convent of St. Thomas to save the doped up kids who forgot to eat.
Youth Day: Thousands of prayers said by nuns.

I think these kinds of numbers say something about the events and their worth. These pics also say a lot as well.
The Woodstock pic looks like the end of some post-apocalyptic war movie. The Youth Day pic just looks more alive, more hopeful. So if you’re choosing which way to live which one would it be? Youth Day or Woodstock?

HT Many of the Woodstock numbers were based on this site.