Obama and Lincoln: The Contrast 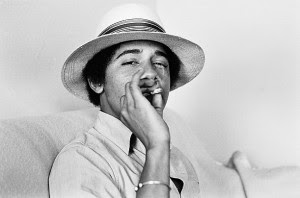 OK. Show of hands. Who thinks the obsession of comparing Barack Obama and Abraham Lincoln is getting a little creepy. It seems that now Obama’s bought into it. Here’s the latest from the NY Post:

In what will be a Lincoln-themed inauguration from top to bottom, Obama won’t only follow in the footsteps of the former president – he’ll also eat like him, it was announced yesterday.

Obama’s jampacked Abe-apalooza moved into high gear with an announcement from the Congressional Inaugural Committee that it will hold a luncheon next Tuesday following the swearing-in ceremony that’s modeled after foods Lincoln enjoyed.

OK. This is getting a lot creepy. So while the media compares the two, CMR will take this opportunity to contrast the 16th and 44th Presidents:

1) Lincoln persisted in fighting a war when many around him told him to seek a compromise.

Obama is Mr. Cut and Run.

2) Lincoln went to war with those who hated America.

Obama went to their church.

3) Lincoln believed in things like “a moral, a social and a political wrong,” and “the eternal struggle between these two principles — right and wrong.”

Obama thinks those questions are above his pay grade.

4) Abraham Lincoln believed in the principle that no human being should be considered the property of another.

5) Lincoln was a Republican.

Obama is a Democrat. Duh! 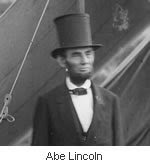 Obama wore this one:

Obama’s wife? Come on. Do you really think I’m going there?

9) Lincoln is considered by many to be the “Savior of the Union.”

Obama considers himself to be just “The Savior.”

11) Lincoln said: “Those who deny freedom to others, deserve it not for themselves; and, under a just God, can not long retain it.”

Obama said, “I don’t want my daughter punished with a baby.”

12) Lincoln: “…I know that the Lord is always on the side of the right. But it is my constant anxiety and prayer that I and this nation should be on the Lord’s side.”

When asked what sin is Obama said, “Being out of alignment with my values.”

13) Lincoln picked Andrew Johnson as Vice President because was both a Southerner who remained loyal to the Union and a Democrat.

Obama picked Joe Biden because he was a Catholic from Pennsylvania.

Obama, on this, has proved Lincoln wrong. So far.