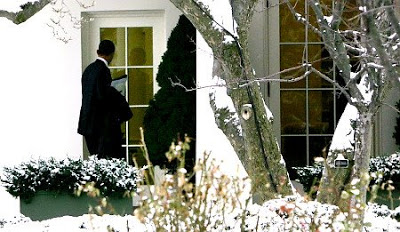 This is truly one of the clearest examples of media bias I’ve seen in a long time…at least since last week, anyway.

President Barack Obama walks into a window because he thought it was a door. If the media had any sanity left they’d leave it as just a humorous moment. But guess what – the NY Daily News feels the need to point out that it was the Republicans fault that Obama walked into the window. And besides, they say, Bush once tried to open a locked door:

It looks like President Obama hasn’t gotten acquainted to his White House surroundings. On the way back to the Oval Office Tuesday, the President approached a paned window, instead of the actual door — located a few feet to his right.

Doors didn’t open automatically for Obama’s predecessor either. While making a hasty exit from a 2005 press conference in Beijing, former President George W. Bush tugged on the handles of a door, only to find it locked.

Bush laughed off the blunder, but the pictures still live on as part of Bush’s lame duck legacy. However, there was little note taken of Obama’s rookie mistake.

Obama, who was returning from meeting with Congressional leaders, may have been distracted by Republicans’ icy reception to his $825 billion stimulus package, which is poised to pass on Wednesday even without a groundswell of Republican support.

So Bush tried to open up a locked door (which had the advantage of actually being a door) and it’s emblematic of his legacy. But Obama tries to walk through a window and it’s because of the Republicans icy reception.

Nah. No bias in that story. Nothing to see here. Move along.