March To Madness – The Creep 16

Things are really starting to take shape in the contest to find the person who exerting the worst influence on our culture. Some of the bubble players and teams have fallen by the wayside as the people with a proven track record show why they are the favorites. Here are your Creep Sixteen. 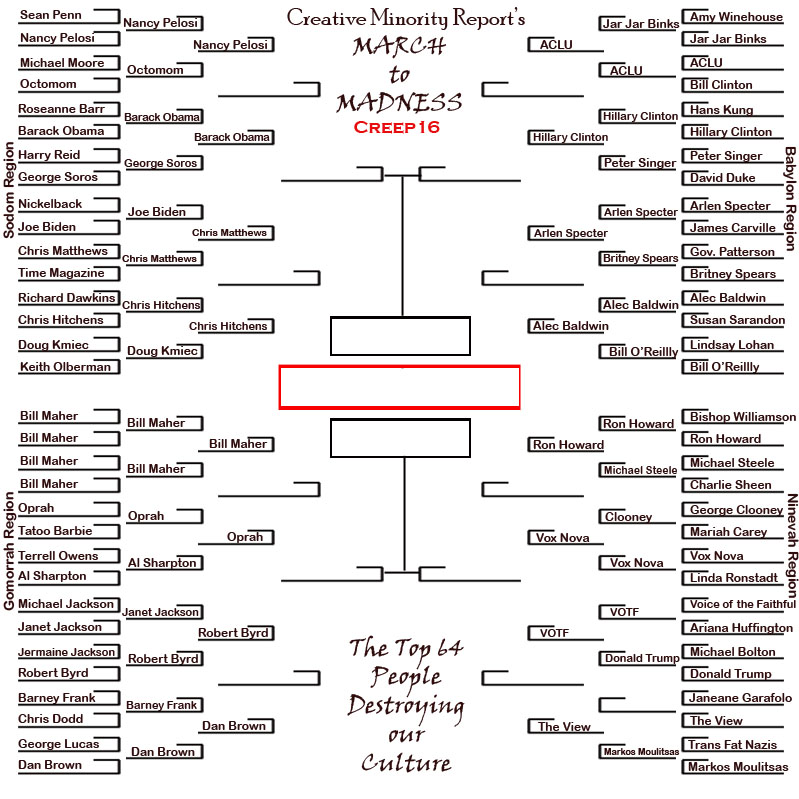 Some big surprises advanced to the Creep 16 in the only tournament that really matters.

Pelosi over OctoMom – The eyes have it. Pelosi looked surprised that she won and flew out on an Air Force Jet. Hey, in the end no matter how messed up she might be OctoMom gave life while Pelosi seems hell bent on destroying human life.

Obama over Soros – Obama wasn’t gonna’ by punished by a billionaire.

Chris Matthews over Joe Biden – Biden just had a little too much pride to get down and dirty enough to compete with Matthews, who went after loose balls without dignity.

Oprah over Al Sharpton – Al thinks “its a outrage” that he lost. But pound for pound Oprah is simply capable of more damage. Al’s bullhorn just wasn’t big enough.

Robert Byrd over Janet Jackson – Did you really think the former Klan member would let “one of her kind” win?

ACLU over Jar Jar Binks – Jar Jar was content to screw up a galaxy far far away. The ACLU is screwing up this one.

Hillary Clinton over Peter Singer – Peter Singer came up with great theories on how to advance evil in Western Civilization but Hillary puts them into practice. Every day.

Arlen Specter over Spears – It came down to one last play. Spears who reinvented herself and made yet another comeback was on defense. Specter had the ball. It was just a question of whether he’s go left or right. Spears guessed right but Specter did the non primary year shuffle and only faked right and drove left. Sadly, if this were an election year Spears likely would’ve been right.

Alec Baldwin over Bill O’Reilly – Both loudmouth blowhards but CMR gets the feeling that Baldwin really believes it.

Ron Howard over Michael Steele – Howard gets the victory just for gumption because he’s attacking a 2,000 year old institution while Steele is simply presiding over the destruction of the Republican Party which has only been around for 150 years.

VOTF over Donald Trump – In a choice between morally bankrupt and financially bankrupt, morals win out here.

The View over Markos Moloutsis – The View recruits new fresh faces with their lunacy. Kos simply preaches to the converted.