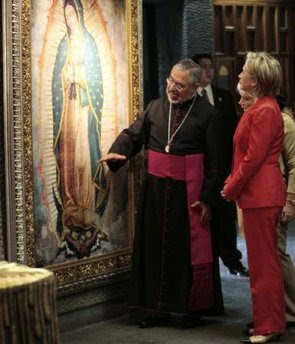 After the reset button fiasco a few weeks ago, you would think that the protocol folks at Foggy Bottom would be a little more attentive to detail. You would be wrong.

This is absolutely priceless.

[CNA] During her recent visit to Mexico, U.S. Secretary of State Hillary Clinton made an unexpected stop at the Basilica of Our Lady of Guadalupe and left a bouquet of white flowers “on behalf of the American people,” after asking who painted the famous image.

The image of Our Lady of Guadalupe was miraculously imprinted by Mary on the tilma, or cloak, of St. Juan Diego in 1531. The image has numerous unexplainable phenomena, such as the appearance on Mary’s eyes of those present in the room when the tilma was opened and the image’s lack of decay.

Mrs. Clinton was received on Thursday at 8:15 a.m. by the rector of the Basilica, Msgr. Diego Monroy.

Msgr. Monroy took Mrs. Clinton to the famous image of Our Lady of Guadalupe, which had been previously lowered from its usual altar for the occasion.

After observing it for a while, Mrs. Clinton asked “who painted it?” to which Msgr. Monroy responded “God!”

Clinton then told Msgr. Monroy that she had previously visited the old Basilica in 1979, when the new one was still under construction.

After placing a bouquet of white flowers by the image, Mrs. Clinton went to the quemador –the open air area at the Basilica where the faithful light candles- and lit a green candle.

Leaving the basilica half an hour later, Mrs. Clinton told some of the Mexicans gathered outside to greet her, “you have a marvelous virgin!”

This evening Secretary of State Hillary Clinton is set to receive the highest award given by Planned Parenthood Federation of America — the Margaret Sanger Award, named for the organization’s founder, a noted eugenicist. The award will be presented at a gala event in Houston, Texas.

This is the Secretary of State we are talking about. Wars have been started over less. As Catholics we can laugh off such and ill informed remark, other peoples are not so understanding.