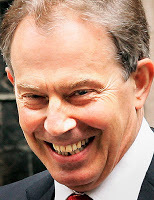 In a stunning move, the Catholic Church announced today that it is converting to Tony Blair-ism. The move comes on the heels of recent interviews given by the former Prime Minister, a recent Catholic convert, where he criticised the Church’s stance on homosexuality.

Blair, is also, of course, famously pro-choice when it comes to abortion.

Once in the Church, Blair announced that he believed many improvements were necessary, indicating a major “re-thinking” of the Church was necessary.

So, after not much reconsideration, the Church today announced its decision to convert to “Blair-ism.”

The move shows a flexibility in the Church which has long been wished for among many non-Catholics. “The Church’s willingness to toss aside 2,000 years of the best thinking ever done by saints and Fathers of the Church in favor of some little-thought-out comments from a recent convert shows an adaptability that I think people are looking for nowadays,” said one columnist from Commonweal.

No word yet, however, from the Holy Spirit. But many theologians are saying no news is good news on that front. “If God had a problem with this move I’m sure he’d let us know,” said one liberal theologian.

“We’re all very excited,” said a theologian from Notre Dame University who shall remain nameless. “I think a few other ‘rethinkings’ are in order in the spirit of Blair-ism. Perhaps next the Church could convert to McBrien-ism.”

Notre Dame University is already said to be considering changing all of its literature to read, “Notre Dame, an institution of higher learning in the Blairist tradition.” No word on how closely they will follow Blair-ism because they didn’t follow the Catholic tradition all that closely either.

The gospel at Mass will be introduced by saying, “The Gospel according to (insert scribe’s name here) as interpreted by Tony Blair.”

Damian Thompson recently reported that Archbishop Nichols had this to say about Blair’s criticism of the Church:

“I think it was extraordinary. I also think his political instincts, which are very strong, are not a good guide to the teachings of the Catholic Church, and a bit more reflection is needed as to the relationship between political instinct in general – and certainly his – and the nature of the truth that the church tries to put forward . . . Maybe he lacks a bit of experience in Catholic life.”

No word yet on whether Archbishop Nichols will be forced into a sabbatical to reconsider his thoughts.

The name change from Catholicism to Blair-ism may be difficult for some “traditionalists”, said one cardinal. “But we now believe Blair is the repository of truth in this world,” he said. “And we couldn’t call ourselves Catholics anymore if we believe what Tony Blair believes. The two are incompatible so we just made the jump and did the name change and everything.”

Many Catholics are expected to fall right in line as they are a non-thinking group that simply does what they’re told. Said one Catholic: “Look, I’m sure Tony Blair has put a great deal of thought into his criticisms of the Church because he wouldn’t be so stupid as to criticize the Church just months after joining if he hadn’t thought long and hard about the issues, right? I’m sure he’s read all the great thinking on human sexuality and the sanctity of life done these past 2,000 years, right? I mean, he wouldn’t be so stupid as to sound off with an intention to change the Church without having studied it, right?” Right?

Some said they were pleased because gone forever are the days when people converted to the Catholic Church, they now want the Church to convert to them. “We are all Tony Blairs now” said one Catholic.