Pope Says Watch Out for Secularism in the Liturgy 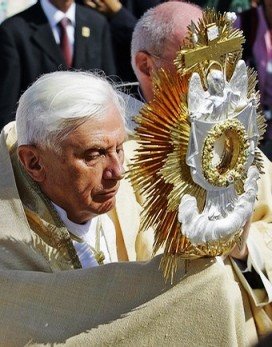 Zenit has a short piece today on the Pope’s latest deep insight into the liturgy, and I think its particularly useful for our day. About a year ago I visited a local parish and had the overwhelming sense that many of the people there were well-meaning liturgical zombies. They came to church, so good for them and for the Mystical Body… but somehow the lights were not on in their eyes and hearts. Of course, I can only judge by external signs, and only God knows what was really going on in their hearts. But the casual attitude and obvious indifference seemed to be everywhere. Sometimes it was people who only feared mortal sin by missing Mass, other time it was people who were simply going through the motions. Even with all of the rubrics followed, somehow it seemed a bit empty. Here’s what the Pope has to say:

“Today there arises the risk of a serpentine secularization even within the Church, which can convert into a formal and empty Eucharistic worship, in celebrations lacking this participation from the heart that is expressed in veneration and respect for the liturgy,” he cautioned.

And here is a good chance to discuss what the Church teaches on the disposition of the recipient of the Eucharist. With a belief in the Real Presence, one might be tempted to think that it is the power of the sacrament properly administered that changes us. This is true. But the Church teaches that sacraments also work ex opere operantis, that is, by the work of the worker, meaning that proper disposition allows the recipient of the sacrament to draw more deeply from its benefits.
Obviously, someone who hates the Eucharist and receives it under duress will not gain benefit from it. But on the everyday level, people who receive without love, without the desire for the Good in the sacrament, without awareness of receiving the very life of God in the Body of his Son, with an empty sense of busy participation, are not receiving to the fullest degree possible the very transformative Christ-life that God wants to share. Similar things can be said about receiving outside of the state of grace. This is why the fathers of Vatican II were so urgent about the term “active participation” and said it was the aim to be considered before all else. Active participation means drawing from the deepest wells of grace by knowing what you were doing and doing it to the fullest for transformation: full, conscious, active and fruitful participation were the words they used most often in Vatican II. The Pope added:

And nevertheless, he added, the Eucharist is “the bread of eternal life of the new world that is given us today in the holy Mass, so that starting now the future world begins in us.””With the Eucharist, therefore, heaven comes down to earth, the tomorrow of God descends into the present and it is as if time remains embraced by divine eternity,” the Bishop of Rome explained.

This beautiful language presumes some theological background. The Pope teaches that the Eucharist gives a foretaste of what living fully in the life of the Beatific Vision will be like at the end of time when God has fully renewed the heavens and the earth. Spiritually living on the very life of God will be the norm in heaven, and in the Eucharist we get to experience it in the mode of sacrament now on earth. Saying that heaven comes down to earth is not to speak so much of location as much as condition: we get a foretaste of our heavenly condition here on earth. By tasting, singing, proclaiming, seeing and hearing the things of heaven in the liturgy, we become more heavenly and get to experience divine eternity even in earthly time.

We can participate actively and fully or we can be liturgical zombies in either the novus ordo or the Extraordinary Form.