Is The 2012 Trailer Anti-Catholic? 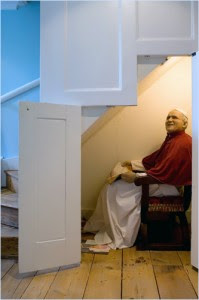 I’m a movie guy. I love going to the movies. Don’t get there often but I still check out all the trailers online and plot strategy to get out of the house for those movies I really want to see.

At the 20 second mark we’ve got the arms of the Jesus the Redeemer statue in Rio De Janiero falling off and then the whole thing falling over completely.

34 seconds in you see like fifty thousand people with candles standing in St. Peter’s Square looking up at the Pope who’s looking down at them.

36 seconds in you’ve got a crowd of people all making the sign of the cross.

Then you get about 12 or so seconds of regular old fireballs from the sky type mayhem.

52 seconds cut to Cardinals inside praying only to look up at the art on the ceiling of the Sistine Chapel to see it breaking apart and presumably crushing them.

54 seconds Those people who were praying with candles outside are now screaming and running. Why? Because the dome of St. Peter’s is crashing down on top of them and then rolling over them crushing a few thousand people as it rolls essentially on top of the camera blacking everything out.

The rest of the trailer is just regular old mayhem and the White House getting destroyed. And at the end it says, “Find out the Truth.”

And I’m just sitting there thinking “I think somebody’s got a problem with Catholicism.” I mean, that makes Ron Howard looks pretty nice by comparison. But then I thought maybe it’s just because Catholics have the big iconic architecture and imagery. I mean what would Protestant mayhem look like anyway? Rick Warren falling over on top of someone.

I don’t like to jump to conclusions so I Googled Roland Emmerich, the director, who, according to numerous sources is openly gay and an activist liberal. But hey, it’s Hollywood, who isn’t?

I wondered if this guy has some sort of distaste for things Catholic. And darn it but what do I find? I warn you this is kinda weird.

And then it gets a little weirder. I’m not kidding.
According to the Guardian:

Mao and Lenin fill the length of the 25ft living room wall; an old master-style painting of the Crucifixion shows Jesus sporting a Wham T-shirt; in the guest bathroom is a portrait of Saddam Hussein