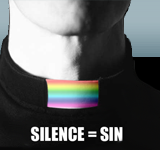 We have seen many despicable attacks on the Church and our priests, but this honestly is about as low as you can go.

The Washington City Paper has this:

A new Web site hopes to use the oldest trick in the book to combat the Catholic Church’s opposition to same-sex marriage: A good, old-fashioned forced outing!

At ChurchOuting.org, you’re invited to scroll through a list of every Achbishop, Bishop, and Reverend in the Archdiocese of Washington, zero in on one you know is gay, and then submit your “detailed account of how you know the priest in question is being hypocritical through his silence.” (Alternately, get at them via Twitter or Facebook).

Tim Graham at Newsbusters notes “The web site’s creator is Phil Attey, who just last year was an Obama Pride coordinator in DC. The DC gay magazine Metro Weekly adds that Attey worked for the left-wing gay activists at the Human Rights Campaign for the “bulk” of the 1990s.”

For generations, in Catholic churches across the country, LGBT youth are told they should be ashamed of who they are and that they should lead loveless lives as social and religious abominations. The emotional, psychological and spiritual abuse inflicted on them by Catholic priests and our church hierarchy is in reality as damaging as the physical or sexual child abuse anyone would quickly condemn. Yet to this abuse, few raise their voices and say “ENOUGH!”

So opposing gay marriage is the same as child abuse. The sad irony that the priest doing the actual child abuse were mostly homosexuals is lost on them.

It goes without saying that this evil invites the slander of any good priest against whom somebody has a grudge. Just evil.

Perhaps sensing the evil of what they are doing, they try to couch it in the language of “choice.” Why do they always try to conflate evil with choice? Anyway:

It is not the intention of this site to complicate the lives of closeted gay priests, rather to help them make the difficult choice to stand up against the hateful and harmful new direction the Church hierarchy is taking the Holy Mother Church

Ahem, there is nothing new about it. Our “hateful bigotry” goes all the way back to Jesus and beyond. They are going to help priests “choose” to oppose the Catholic Church, whether they like it or not. Not much of a choice.