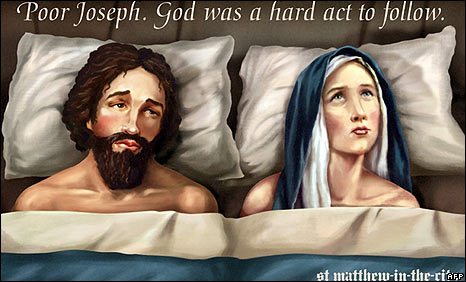 This is bad folks, so if you are prone to fainting or complaining in the combox, read no further.

We have multiple layers of offensive here. First, let’s start with the obvious. The billboard. St Matthew-in-the-City Church in Auckland erected a billboard. Not much commentary needed, just don’t scream at me for posting it.

The suggestion is obvious and offensive. Within hours someone painted over it. Good.

Not content to let the billboard speak for itself the offender, Archdeacon Glynn Cardy, decided to double down. Cardy refers to the Incarnation as God as “sending down sperm.”

The church’s vicar, Archdeacon Glynn Cardy, said the aim of the billboard had been to lampoon the literal interpretation of the Christmas conception story.

“What we’re trying to do is to get people to think more about what Christmas is all about,” he told the New Zealand Press Association (NZPA).

“Is it about a spiritual male God sending down sperm so a child would be born, or is it about the power of love in our midst as seen in Jesus?”

“Hark the Herald Angels sing, the spiritual male god has sent down his sperm.” Is this really what people think Christmas is about or is it just what heretical morons say they think. Heck, it doesn’t even rhyme and we know how us unthinking rubes like rhymes. Personally, I am more in the “Peace on earth and mercy mild, God and sinners reconciled,” camp.

It seems to me that we need to have a term for the such self-loathing and heretical Christians. Something that really conveys the adolescent and ridiculous nature of this type of absurd behavior. Of course, Milingoism comes to mind but it seems too obvious. Gnosticrucians has a nice ring to it but may be too esoteric. I suppose that for now I will just stick to jackass.