I Love A Good Surprise! 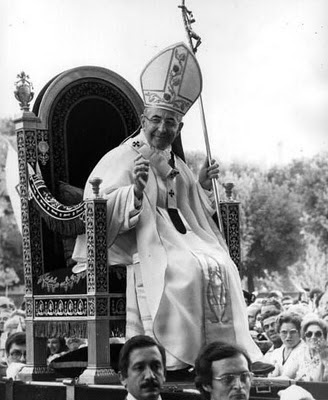 I love a good surprise, don’t you?

I love a good rumor, don’t you?

I especially love a good rumor about a good surprise.

Various blogs and news agencies have been reporting on ‘well informed sources’ who say that the Holy Father will unveil a ‘good surprise’ to the Catholic world during this years Holy Week celebrations.

Originally mentioned at Catholic Sector, suggestions on the likely surprise range from the return of the Sedia Gestatoria, to the end of Communion in the hand and even the beatification of Pope John Paul II. Me thinks some may be loosing the run of themselves. Other sources say that Easter Mass at the Vatican may be celebrated Ad Orientem, but all Mass at the Vatican are celebrated ‘towards the East’ as St Peter’s faces east.

The Mass in the Extraordinary Form celebrated by the Holy Father, possibly on Holy Thursday is the rumour that seems to have most weight behind it, but even this seems impossible at the present, but who knows?

Personally, as it is the Year for Priests and the announcement is to be made (supposedly) on Holy Thursday, I would imagine it has something to do with a document that the Vatican has been preparing on the formation of Priests and Religious. But I’m only guessing, I suppose we will just have to wait until Holy Week to find out, and pray until then that whatever the surprise is, it will be for benefit of the Church and give glory to God.

Over at Rorate, speculation runs rampant alternating between the plausible and fanciful. New Catholic speculates on whether the Pope may retract the indult allowing communion in the hand. I wish, but I don’t think that is likely. In the combox, our old friend Mr. Perkins thinks it may be the restoration of faculties for the priests of the S.S.P.X. Also unlikely but more likely than retraction of the indult.

So forgive me if I play Catholic bookmaker and give odds on the current speculation.

My money, especially given the recent attack on the Pope, is on the Pope pimping his ride–the return of the Sedia Gestatoria.