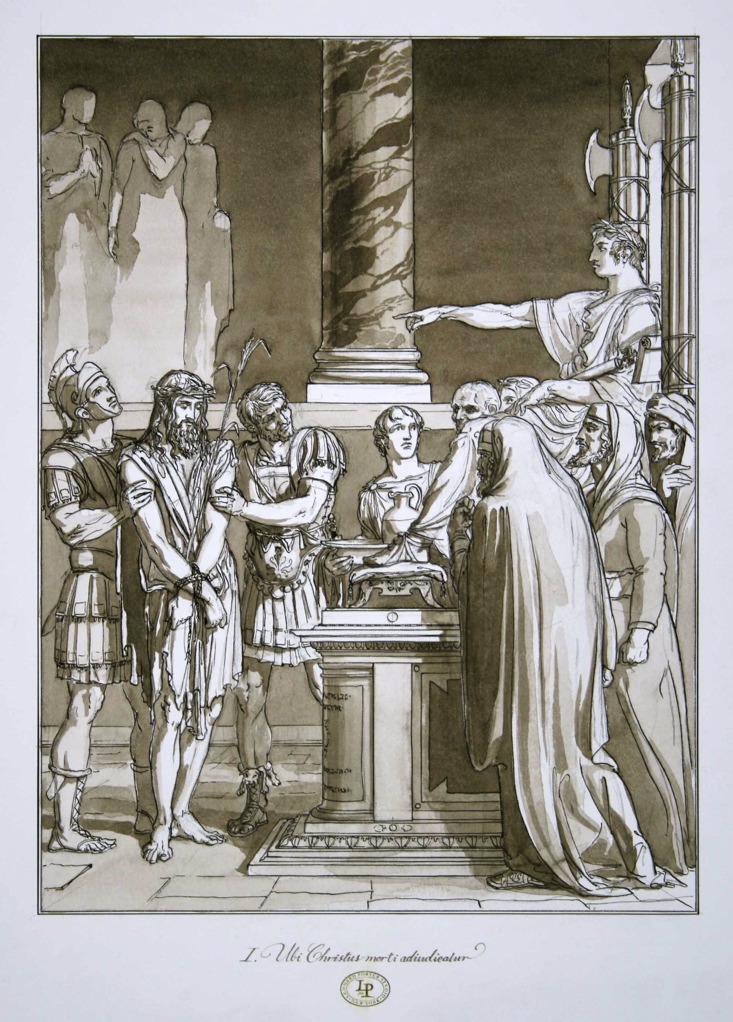 Just in time for Lent, noted traditional painter Leonard Porter has completed a set of *sketches* for a full set of 14 stations of the cross. CMR readers may remember our post on his St. Therese of Lisieux, or his recent Christian paintings.
Some months ago, Porter started work on a set of stations for Christ the King Church in New Vernon, New Jersey. While most people simply buy stock sets of stations from catalogs for their churches, there are a few new commissions out there, including one by liturgical artist Davis D’Ambly. Porter’s stations, however, like his other works, are loaded with complex and intelligent symbolism which works on many layers. The images shown here are simply his ink wash sketches–the final product will be in the vibrant color he has become known for.
Station One, for instance, Jesus Condemned to Death, shows the statue-like Pilate raised in pagan power with his feet on a stool, the very image of worldly authority, condemning the God of the universe. The single column in the rear not only signifies the place of Pilate, but prefigures the Scourging at the Pillar.
Porter’s sophistication comes through also in the Nailing of Christ to the Cross, where the soldiers stand like statues, both in honor and like men devoid of divine life in a desolate, windy landscape. The Taking from the Cross shows a graceful composition of S-curves where the Crown of Thorns glows with a spiritual radiance.
Porter will spend the next year painting the final set in color, and I’ll be adding updates as they come along.