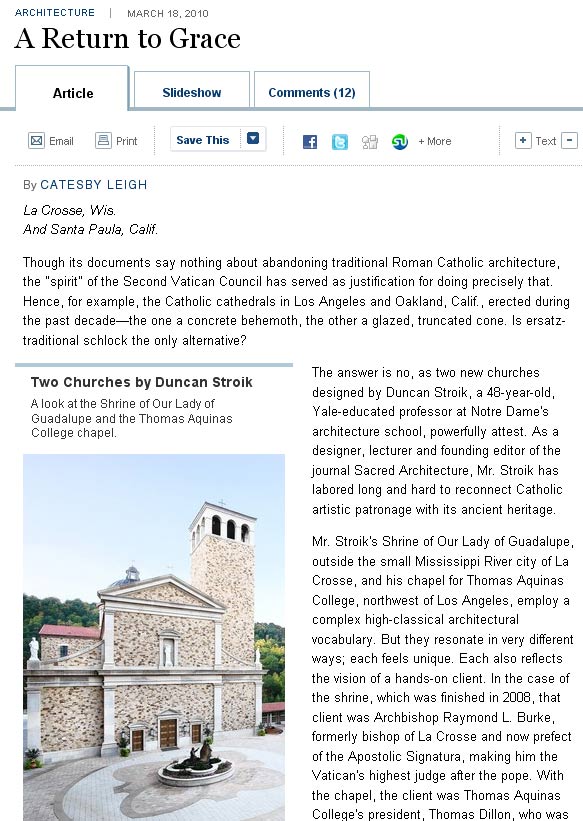 The Wall Street Journal has discovered the “sleeper” renaissance of traditional Catholic architecture in a new article. CMR has carried stories on the work of architect Duncan Stroik over the years, and the Liturgical Institute has invited him to lecture. But now through the astute cultural critic Catesby Leigh, readers of the mainstream press are discovering the Catholic cultural renewal as well.

A Return to Grace

Though its documents say nothing about abandoning traditional Roman Catholic architecture, the “spirit” of the Second Vatican Council has served as justification for doing precisely that. Hence, for example, the Catholic cathedrals in Los Angeles and Oakland, Calif., erected during the past decade—the one a concrete behemoth, the other a glazed, truncated cone. Is ersatz-traditional schlock the only alternative?The answer is no, as two new churches designed by Duncan Stroik, a 48-year-old, Yale-educated professor at Notre Dame’s architecture school, powerfully attest. As a designer, lecturer and founding editor of the journal Sacred Architecture, Mr. Stroik has labored long and hard to reconnect Catholic artistic patronage with its ancient heritage. More…