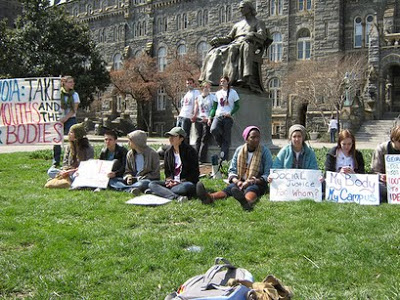 What does the Georgetown University administration think they’re teaching their students? A group of pro-choice, pro-birth control Georgetown University students demanded a meeting with the President of the school John J. DeGioia, about two months ago. After receiving no response the students mailed a box of condoms to the school President, put tape on their mouths, chained themselves to a statue to protest the lack of available birth control on campus, and issued a deadline to the school President.

And guess what, it seems that acting like spoiled children may just win the day.

At 3:20 p.m., H*yas for Choice, in solidarity with Plan A, issued a statement via e-mail announcing that “We are giving President DeGioia a deadline of 8:00 TONIGHT to take the tape off our mouths and the chains off our bodies!”

The protesters received a letter from the administration at 7:15 p.m. stating that they will open up dialogue with Plan A. The letter was delivered by Assistant Director of Student Programs Tanesha Stewart. Cory, one of the leaders of Plan A, said that the coalition hopes for a meeting within the next week.

Georgetown University officials say they are now willing to talk about sex health issues after a dozen student protesters got their attention during a rally Saturday.

You have got to be kidding me, right?

These students act like prima donnas and they are granted a meeting? What message does the President of the school thinks this move sends to every other student group? Blackmail works?

And one has to wonder how much the school is willing to “negotiate” on the issues of birth control and abortion?

In fact, it seems that this may be the second major capitulation to the group this month. The Philadelphia Bulletin is reporting that The Student Activities Commission (SAC) of Georgetown voted in favor of funding an abortion “rights” panel on campus run by H*yas for Choice.

According to the blog of the Georgetown Voice, Plan A started its events on March 21 with the panel discussion, which was the first event in Georgetown history to not include the pro-life argument in an open discussion of abortion. Members of the panel included representatives of the National Abortion Federation, Choice USA and GU Men Creating Change. They “spoke about the importance of male involvement in the pro-choice movement, why male involvement is especially important to the pro-choice movement now, and how Georgetown students can lobby the school to fund more similar events.”

A member of Plan A reportedly said that Sunday’s panel discussion was the only event funded by Georgetown University in the overall Choice Week which is now taking place, also according to the Georgetown Voice blog.

I wonder what would happen if pro-life faithful Catholic students chained themselves to a statue in the middle of campus. Something tells me they’d be there for quite some time.