Warning: Bible May Impede Your Judgement 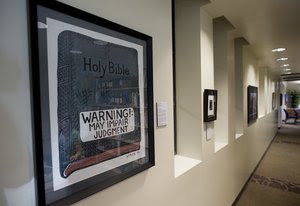 Hanging in the Sacramento County Public Law Library is a painting of the Bible with a warning across its front which reads: “Warning! May Impair Judgment.”

The library insists that there’s nothing wrong with this display despite some who say it does not belong in a government-sponsored institution and have asked for it to be taken down. The library has refused.

The title of the “art” is “Moral Values.” In a statement from the artist which accompanies the piece, it says “There must be something stupid about religious faith which renders people stupid.”

Just a question – if an artist had put something up saying “Homosexuality makes you stupid” what are the chances it would be up in the library?

The artist, an atheist, insists that the work isn’t supposed to be anti-Christian but only anti-religious. The library can argue that it’s a free speech issue but the fact is that this is not even art, it’s propaganda.

This, of course, is nothing short of taxpayer supported anti-Christianity. I think liberals think that separation of church and state (which is made up in the first place) means that churches can’t say anything about government but government can do whatever it takes to destroy religion.