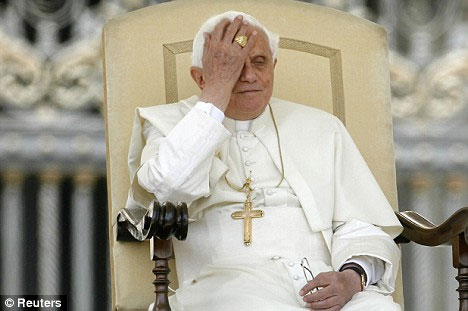 What?! The Church’s public relations team has embarrassed itself and the Church again? What a shock. I say that because…IT’S NOT A SHOCK AT ALL.

The incompetence of so many in the Church is evidence that the Church is under the protection of the Holy Spirit. There hasn’t been this kind of incompetence since Shemp was told to give the monkey wrench to Larry who happened to be standing right above Moe. This one takes the cake though. The Church’s papal visit team put out a pamphlet attempting to explain the terms used in the Mass. It is painfully ridiculous.

Today’s Mail…highlights an excruciatingly embarrassing pamphlet produced by the papal visit team which compares the Mass to a “gig”, the Pope to a “headline act” and liturgists to “performers”. Supposedly this appalling, babyish leaflet is intended to inform non-Catholic staff about what is happening at papal events, but really it just patronises them, and leaves the Church looking silly. It baffles me how anyone could have thought publishing this was a good idea: it makes the Church, or its public relations department, look weird and disconnected from real life.

Here’s a picture of the pamphlet being handed out:

One – It talks down to the press by talking to them like they’re concussed four year olds. Two -It belittles the Mass and the Pope.

A facepalm is the only rational reaction.