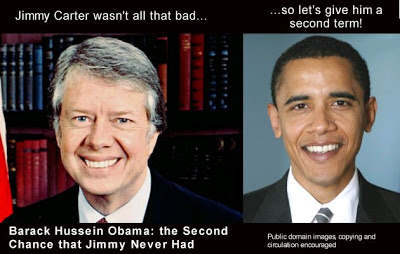 Admonishing his own party, President Barack Obama says it would be “inexcusable” and “irresponsible” for unenthusiastic Democratic voters to sit out the midterm elections, warning that the consequences could be a squandered agenda for years.

“People need to shake off this lethargy. People need to buck up,” Obama told Rolling Stone in an interview to be published Friday. The president told Democrats that making change happen is hard and “if people now want to take their ball and go home, that tells me folks weren’t serious in the first place.”

Compare that to Jimmy Carter’s malaise speech where he blamed the country for not doing well enough to make him a great President. Funny how with Carter and Obama the fault is not theirs but everyone else’s.

Also interesting is that three days after his speech speech, Carter asked for the resignations of all of his Cabinet officers, and ultimately accepted five of them.

Recently we’ve had Larry Summers, the director of the National Economic Council and the president’s chief economic policy co-ordinator, resign. Christina Romer, chairman of the Council of Economic Advisers, recently returned to Berkeley and Peter Orszag, the budget director, left earlier in the summer.