Because of his faith, state wrestling title contender Joel Northrup had to forfeit a match. It was either that, or wrestle a girl.

CNN A high school wrestler in wrestling-crazy Iowa forfeited a tournament match Thursday after refusing to grapple with a female opponent.

“As a matter of conscience and my faith, I do not believe that it is appropriate for a boy to engage a girl in this manner,” Joel Northrup said in a written statement, according to the Des Moines Register.

Northrup is home-schooled but wrestles as a 112-pound sophomore for Linn-Mar High School in Marion, Iowa. He was a state title contender with a 35-4 record, CNN affiliate KCRG-TV reported.

I don’t have an issue if girls wish to compete head to head against boys in most sports, but wrestling is a different thing. It is a little too….ummm…physical.

Northrup, for his part, makes it clear that he respects these girls and their athletic accomplishments, but he cannot in good conscience wrestle a girl.

“I have a tremendous amount of respect for Cassy and Megan and their accomplishments. However, wrestling is a combat sport and it can get violent at times. … It is unfortunate that I have been placed in a situation not seen in most of the high school sports in Iowa.”

Good boy. There are some things more important than wrestling. 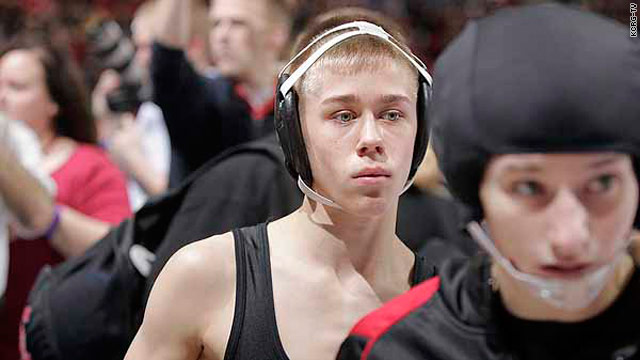