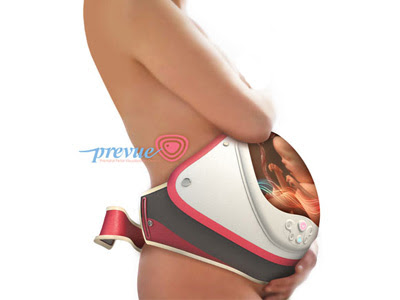 Now here’s something definitely weird and possibly wonderful. It’s kind of an ultrasound belt that expectant mothers could wear that would constantly show their baby. It’s called a PreVue and was featured in the mag Business Insider.

This would seem to be a great tool of pro-lifers, right? Moms could walk around advertising their unborn babies. The only thing is that it’s kinda’ weird because you’d probably see all sorts of other things in there like bowels and stuff which wouldn’t be so cool. But overall pretty cool.

It’s not ready yet as it’s still in the planning stages and I’m not sure if this is completely safe for the baby though. But if it is could you imagine how this would freak out BIG ABORTION. They would hate this thing. And that always makes me happy.

The device is called PreVue and it could allow pregnant women see their baby 24/7. Women could wear it around their abdomens to see real images of their babies. Its kind of like ultrasound. “The screen is made from a stretchable e-textile, so it will grow along with the mother.” Some think.. PreVue could help expecting parents bond with children before birth.

“This concept is still in the ideation stage, so there’s no telling how clear the images will actually be, or how much something like this will cost..”

Pretty cool thought though. It’ll be interesting to see if it actually happens.