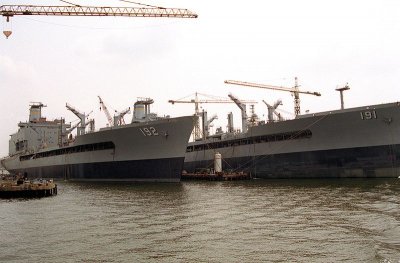 Government efficiency at its best. Two US Navy ships are both headed for the scrap heap, having never sailed.

…The USNS Bejamin Isherwood and the USNS Henry Eckford were commissioned in 1985 at the Pennsylvania Shipbuilding Co. to carry fuel to the Navy’s fleet around the globe.

When the company defaulted on its Navy contract in 1989 the 660-foot ships were sent to Florida for completion, but cost disputes terminated that contract in 1993.

Since then, the vessels have sat 95 and 84 percent complete at the mouth of the James River as part of the mothballed ghost fleet.

Embroiled in legal battles, the ships remained nearly done for years. Now they’re outdated and being sold for scrap.

That’s enough to give anyone with fiscal sanity a headache, isn’t it?