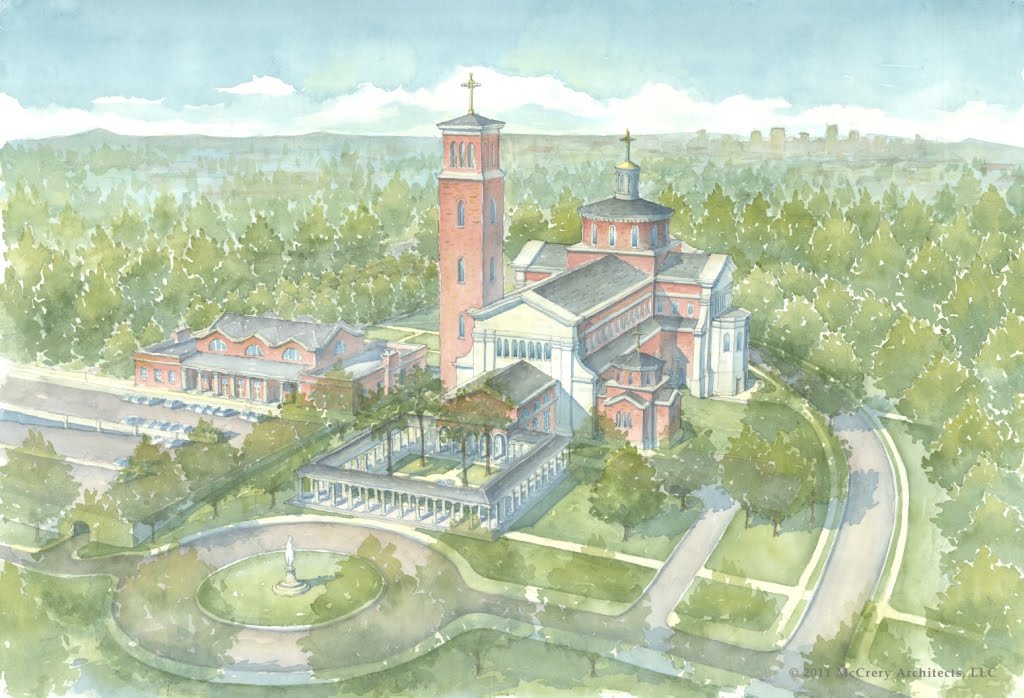 A major step forward in the Catholic architectural landscape occurred this morning.

Bishop Burbidge of the Diocese of Raleigh announced at an 11 am EST press conference that they have chosen an architect for their new cathedral, dedicated to the Holy Name of Jesus. And it is not a high-style, “starchitect” Modernist chosen by the secular museum-based intelligentsia. It is an architect known for his traditional designs (like the new monastery for the Mystic Monk Coffee monks in Wyoming) as well as his own Catholic faith: James McCrery of McCrery Architects in Washington, DC.
Watch a video of the press conference here.
An initial proposal –only in its earliest stages of development– is shown here. But all who love traditional architecture can rejoice. For the first time in more than half a century, a talented architect trained in traditional architecture will design a large-scale cathedral from scratch. Not a renovation. All new.
This is good news.
James McCrery is not local Joe the architect told to “do classical.” He is not a Modernist who knows nothing of traditional design and makes compromised attempts to do something he is not trained to do. He is the real thing. And the people of Raleigh and the nation should celebrate.
The diocese announced about a year ago that they were considering building a new principal church for the rapidly-growing diocese. Rumors buzzed around certain parts of the blogosphere with the usual comments, hoping the mother church of the diocese wasn’t going to look like a “mother ship.”
For those who don’t follow the ins and outs of ecclesiastical architecture very closely, it’s worth reiterating: this is a big, big deal. Talented architect like Duncan Stroik and David Meleca and others have designed large, beautiful buildings for college chapels, parishes and important shrines. But this is the first time in our lifetime that a bishop has engaged a specialist in traditional to design and build a new cathedral.

And this is indeed cause for rejoicing.

cathedral of the holy name of jesus, James McCrery, raleigh