Mass Has Gone To The Dogs – Literally 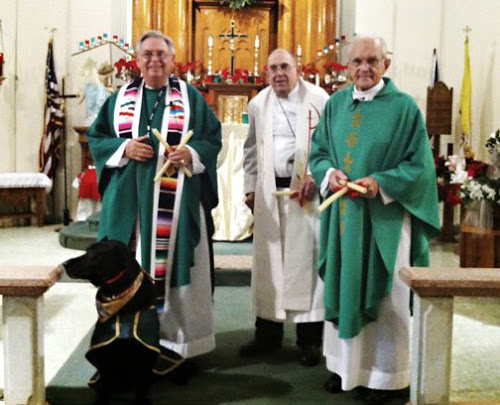 Rev. Roy Snipes of Our Lady of Guadalupe Church in Mission brings five of his large, mixed-breed dogs into the sanctuary during mass. And…And…wait for it….They even have their own vestments.

The dog actually has better vestments than Father. What is with that stole?

[USA Today]”Church can have a tendency to feel rigid and frigid to people,” he says. That dissolves when he walks into Our Lady of Guadalupe Catholic Church in Mission, Texas, with his mutt pack trailing behind his robes. The dogs sometimes veer off from the processional to prowl the pews, greeting favorite people, but during Mass they generally lie quietly at the altar (though one has taken to curling up in the celebrant’s chair, so Sikes has to perch on its edge).

He’s so convinced of the power of the animals that when a newcomer complains (rarely), he says gently, “If you want to look for a church that doesn’t have dogs, I’m sure you’ll find one.” He reminds them Jesus was born surrounded by animals. “In this dehumanized era, I believe dogs are the angels that will keep us human.”

And if reasonable people object, he sends them packing. Unreal.

I wonder if Fr. Snipes has checked with the competent ecclesiastical authorities to check whether he can use the name Catholic?

All dogs may go to heaven, can’t say the same about priests.