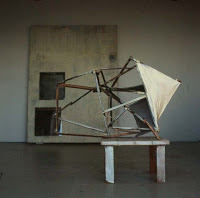 Vatican Radio announced recently that the Vatican will have an exhibit at the Venice Biennale, a world-renowned festival centered in the lagoon city. One might expect that it would be a great opportunity to showcase a renewal of sacred art, one that, as Pius XII said in his encyclical Mediator Dei, finds the mean between extreme symbolism and extreme realism. It would be an opportunity to display the beauty of the Faith, to draw people in by presenting the highest and best that Catholic art could represent: namely, “God’s boundless beauty” as Vatican II so rightly says.
Yet, it seems Cardinal Ravasi had something else in mind, saying that the Pontifical Council for Culture, which he heads, “holds contemporary art at the heart of its interests because it is one of the most important cultural expressions in recent decades.” Ravasi said he wanted to heal a “non-consensual divorce between art and faith, especially in the last century.” “This for us is a germ,” he said, “a seed to return to the hope that there can be even more commissions between churchmen, ecclesial figures and artists — quality contemporary artists,” Ravasi told reporters. ABC news reports that “being Catholic wasn’t a criterion: Vatican officials said they weren’t even sure of the artists’ faiths. Rather, the artists were selected based on the body of their pre-existing work.”
The theme was announced as “Creation, Un-Creation, Re-Creation.”
He then announced some of the artists whose work is featured, though images of their exact works for this exhibit were not readily available in the press.
The American artist Lawrence Carroll was given one third of the exhibit. He chose to display “a floor piece and four wall paintings, one of which has a freezing element that causes it to melt and refreeze cyclically.”

A sample of Carroll’s work is shown here from another exhibit. His abstract pieces, called “table paintings, “are not paintings at all, but pieces of various things screwed to a table, then unscrewed and rescrewed. As a Wikipedia entry (its foibles acknowledged) on Carroll reveals,

“Carroll thinks of the structure as drawing, which can continually be altered and added to or subtracted from (erasure). The form which is connected to the table by screws is often disconnected and moved around until another form appears that interest the artist, and at this point the structure is reconnected to the table. This process goes on for months. Once a form is found the artist often then closes one or more of the forms using newspaper and glue or cardboard. All during this process the structure and the forms are painted. More often than not the work is then completely taken apart and reassembled on the table to begin again until a form (gesture) is found that could have never been predicted. Due to this lengthy process few of these table paintings ever reach completion.”

If it sounds like a whole lot of nothing to you, don’t be afraid be afraid to say so. There is no secret genius at work, no secret message that people without doctorates can’t understand. It is a scam. It is about nothing that really matters, and much of the art market is about fame and commodification, not revelation of Goodness, Truth or Beauty. One can hardly imagine this is going to reignite the Vatican as a great patron of the arts in a way, as one AP story said, that would “engage contemporary artists and intellectuals in ways that once created masterpieces such as the Sistine Chapel.”

Other artists were mentioned, and ABC reports that the “Milan-based multimedia group Studio Azzurro was selected for the ‘Creation’ part of the three-space exhibit: It features a darkened room with a mass of stone in the center that when touched creates images and sounds that recall the animal and vegetable kingdoms.”

The “Un-creation” Section was given to a Czech photographer named Koudelka Josef, a man given to representing off beat a quirky aspect of life in the twentieth century, such as the picture represented here of men urinating in urban isolation. One web site described his work thus:

Throughout his career, Koudelka has been praised for his ability to capture the presence of the human spirit amidst dark landscapes. Desolation, waste, departure, despair and alienation are common themes in his work.

So in all of this, one begs the question: will this make the Vatican a great patron of the arts? Well-intentioned Catholics have been lamenting the divide between the secularist, un-Christian and anti-Christian art world for over fifty years. But art and artists left Christianity, choosing to represent in art philosophical principles aoopsed to Christinaity. And so it must return to Christianity. The answer is not to allow non-Christians to present tangentially Christian work, it is to find artists whose work is so compelling that even the secular art world discovers that they are missing something in their art and their patterns of though.
Iironically, one sees here the same failed pattern  promoted in the 1950s when Dominican friar Marie-Alain Couturier hired Matisse and Le Corbusier to design modern art and architecture. The only people who cared were people driven primarily by shallow anti-intellectual emotion, art critics and architectural cognoscenti. The faithful were simply left confused. And Couturier used almost the same justification as the promoters of this exhibit, not caring about what the artist did with their Church-sponsored commissions, as long as the Church came begging to the secular art world so that she may be anointed by secular intelligentsia as no longer peskily insular backward-looking.
The task of art patronage is, apparently, no longer to support artists who understand the role of art as revealer, to be a leaven to the world by joining the Holy Spirit and man together to make present  the sacramentally-perceived realities of heaven (as any iconographer would tell you). It is simply to be the proud patron of a secular modernists praised by other secular modernists. Couturier called it “betting on genius” rather than cooperating with the Holy Spirit. It didn’t work the first time. And it seems we are doing it all over again.
It’s hard to believe that selling out to the secular art world will light a new fire for the Church. Only the Holy Spirit can do that. Speaking to the world on its own terms might be a start, but one learns the language of a people waiting for evangelization in order to evangelize, not to be drawn in to the same confusion it seeks to remedy. Beauty is the attractive power of Truth, and without beauty, the Vatican exhibit will just present a lifeless, warmed-over, semi-secularized institution that has nothing to say, providing nothing to attract people, like St. Paul, to the flash of God’s greatness. Hard words to say, but it seems they need to be said.