Why Not Give Birth to Your Food? 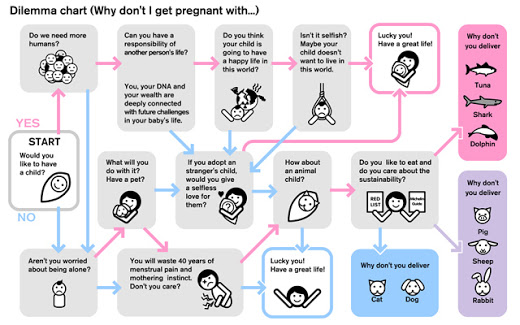 One of the problems with the 21st century is that the line between hilarious satire and horrible truth is just not apparent anymore.

Here’s a helpful chart from her website in case you’re unsure.

This project is a conceptual proposal for a human mother to deliver a shark (or dolphin, tuna) instead of human baby. The project points to a contemporary dilemma about human reproduction and also explains how to technically deliver another species.

We have many issues and dilemmas concerning reproduction, including the foremost issue over population, that leads us to ask the question ‘do we need more humans?’ DNA has programmed our instinct to pass on our genes to the next generation. However, many experts tell that our future is not so bright, and we have responsibility for future generations to make sure that they will have a happy life in the years to come.

As a living thing, we must eat, it is one of our strongest instincts. But eating means killing another life. By eating some animals, we put some species under threat of extinction. Keeping various animal species has become a very important human mission. Concerning these dilemmas, my project proposes for human beings to be able to deliver a Pacific blue-fin tuna and a Spiny dogfish.

If your body tells you to have baby or use your womb, but you don’t want to have a baby, why not deliver a threatened species of fish instead? You can also choose the smallest dolphin, the “Maui’s dolphin” for the dream option. This is because they are an intelligent animal able to build a relationship with us, yet is also seen as a food by some people. Humans delivering fish or other animals might change our perspective of them as ‘food.’