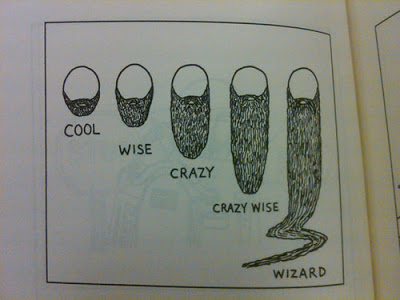 I have had some facial hair for probably 60% of my adult life. Most of the time my beard has been a trimmed van dyke (goatee).

Every once in a while I grow a full beard, but still keep it fairly trimmed. However, at the end of last year I just kind of let my beard grow for a month and it got fairly long.

It intrigued me. What would I look like with a totally full man beard? The intrigue compounds in that, while my hair only has a smidgen of gray, most of my beard is full on white. White.

So this year I have decided to really commit to the beard and see what happens. I am a week or so into it and I have decided not to shave until the new year.

Like grief, there are stages to growing a beard. You start with the Lazy bum faze and then move into the Homeless faze.

After that, there are stages of beard growth.

SO that’s it, I am going to grown a big white beard. Given my current girth, comparison to Santa are inevitable. But like Saint Nick, I am not averse to punching people.