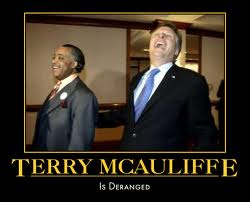 The Democrat party of Virginia put out posters all over college campuses accusing pro-life governor Ken Cuccinelli of wanting to make oral sex a felony. The accusation is, of course, stupid but never even mind that. Liberals know kids are stupid because they run the public schools and they like to keep kids ignorant because they grow up into ignorant adults.

But anyway, it gets worse. Playing off the oral sex theme, the posters on college campuses say things like “Ken Cuccinelli wants to make oral sex a felony” and in an effort to get them to vote they say, “Get your head in the game,” or “Don’t let Election Day go down without you.”

In a sane world that would delegitimize the candidate and the party entirely. But knowing what I do of college campuses, this won’t surprise or offend many people at all.

It’s a lie and a dirty lie to boot and they’re telling it to 18 year olds. And this is a race for governor of the state of Virginia. Think about how sad that is.

The Democrats issued one of those we’re sorry if you were offended non apology apologies. Hey, Terry McAuliffe worked for Bill Clinton so I guess he can’t really help making oral sex a talking point of his campaign.