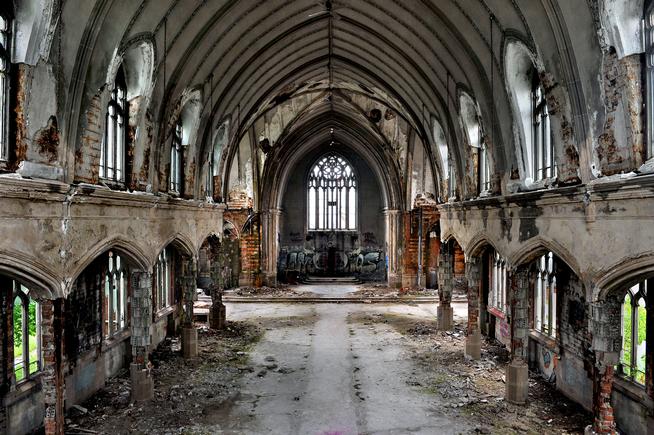 In Part I and Part II of this series, we covered how the synod process has been systematically hijacked by the Pope and his henchpersons to advance the progressive agenda.  When the rules allowed for the few remaining faithful to impede the results or embarrass the cabal, those few remaining faithful were removed from the invite list and the rules were changed to prevent discussion and even prevent voting.

Then we saw how the Pope and his henchpersons systematically use and abuse the apostolic visitation process to demolish any order or prelate that they deem too traditional or just not sufficiently part of the team with no sense of fairness, order, or due process.  It reminds me of Al Capone walking around the table talking about his love of baseball and teamwork.  But when the rules allowed for other Bishops to possibly provide an escape hatch for the abused, those prelates were threatened and the rules were changed to make sure that no bishop could allow new faithful Catholic groups to form in some far flung diocese.

And now we come to the nuns.  As angry and as pessimistic as what I have already recounted might make you, what is being done to the nuns boggles the mind.  While the above actions are targeted at individuals and groups, individual missiles,  these rule changes are nuclear.  This change “signals the end of the contemplative monastic life.”

The Pope has rightly identified cloistered monasticism as the lifeblood of the Church.  Hilary White has done the most comprehensive investigation into what is happening here.  Her work is crucial and will be cited throughout the rest of this article.  Go read every link in full.  Anyway,  Hilary says of the cloistered religious:

Once they’re inside, the world forgets about them. But contemplative religious life is like the mitochondria of the Church. The power source of the cell that makes all the other systems function. The mitochondria are the most unobtrusive and hidden of the organelles of the body, and for a very long time their purpose was not fully understood. But now we know our lives depend on the health of this tiny, secret and hidden little thing. And mitochondrial disease – when the mitochondria fail to function – is devastating.

It has been clear for years that Pope Francis clearly dislikes contemplative orders and he has made numerous unkind remarks about them in the first few years of papacy. In 2016, Pope Francis issued the Apostolic Constitution Vultum Dei quaerere which contains new “guidelines” that showed clearly that the eye of Sauron had spied the contemplatives.  The first thing it did was set a minimum time of formation to nine years. Nine Years. Different orders had traditionally been left to do things there own way and some had long formation period and some shorter.  But to now impose a minimum 9 year formation across the board.  Especially in this time of later vocations, this change could be a back-breaker for certain communities.

But that isn’t all, VDQ also promoted the use of Federations of Monasteries as the universal governance model. These federations are universally progressive institutions, think the Leadership Conference of Women’s Religious, that take over all the administrative functions of the associated monasteries.  This governance model along with the progressives in the Church has been the death knell of any traditional Catholic orders and we have seen the complete collapse of these groups over the last 50 years.

In addition to imposing the minimum 9 years of formation, it imposes upon every order that they must belong to a federation.  These federations effectively take over the formation of all the nuns.  No longer can individual monasteries form those that live with them.  No, those seeking the cloister will be forced to ongoing travel to these conferences in which they will be formed by the progressive federations.

One nun said:
“In the past, each Community has been free to implement whatever type of ongoing formation program that they see fit. We were not required to implement some one size fits all (liberal re-education) program into our daily lives. I cannot imagine how this is all going to play out.”

Well, we know exactly how this is all going to play out.  But for clarity’s sake, this report on the words of José Rodríguez Carballo, responsible for this document’s implementation.

The congregation’s Secretary, Archbishop José Rodríguez Carballo, is reported as saying, “With this explicit reference to the Second Vatican Council, we point to our profound conviction that the council is the point of reference, non-negotiable, in the formation to the consecrated life.”
Not the charism of the order, nor the rule, nor the Patristic tradition, nor the Doctors, nor the mystics, nor any of the 2000-year-old tradition of religious life, from the Desert Fathers to the giants of the Tridentine period; just Vatican II. And only, apparently, a single “interpretation” of it, if we are to judge by the soap and oil Braz de Aviz poured on the ruffled feathers of the Leadership Conference of Women Religious – the most virulently anti-Catholic organisation of “Catholic” religious in the world – and by his vicious persecution of the Franciscans of the Immaculate.
Carballo continues his remarks, giving us a clue as to his feelings towards strictly cloistered, contemplative religious life: “A consecrated life, a life in God but inserted in the ecclesial family, in the church – inserted in the world. Not in conflict with the world, but inserted in continuity,” he said.

In another speech, Carballo “called “some forms” of religious life “antiquated” and claimed that they “say hardly anything to people today.” These, he said “will not remain even though they have [had] a certain success.”

To this end they have also made sure that they can kill off any holdouts.  Under these rules the Congregation can evaluate the “autonomy” of any monastery and if they don’t like what they see.  You. Are. Gone.

Someone else pointed out that under this document none of the currently flourishing conservative or “traditionalist” monasteries or communities could have been founded. This includes the specifically traditionalist Benedictines of Mary Queen of Apostles in Missouri or more mainstream “conservative” groups like the Sisters of Life in New York.
The deadman’s switch: Too many oldies? Too many Trads? You’re done.
Art. 8 §1. Juridical autonomy needs to be matched by a genuine autonomy of life. This entails a certain, even minimal, number of sisters, provided that the majority are not elderly, the vitality needed to practice and spread the charism, a real capacity to provide for formation and governance, dignity and quality of liturgical, fraternal and spiritual life, sign value and participation in life of the local Church, self-sufficiency and a suitably appointed monastery building. These criteria ought to be considered comprehensively and in an overall perspective.
§2. Whenever the requirements for a monastery’s genuine autonomy are lacking, the Congregation for Institutes of Consecrated Life and Societies of Apostolic Life will study the possibility of establishing an ad hoc commission made up of the ordinary, the president of the federation, a representative of the federation and the abbess or prioress of the monastery. In every case, the purpose of this intervention is to initiate a process of guidance for the revitalisation of the monastery, or to effect its closure.
And no sneakily recruiting from other countries either…
§6. Even though the establishment of international and multicultural communities is a sign of the universality of the charism, the recruitment of candidates from other countries solely for the sake of ensuring the survival of a monastery is to be absolutely avoided. To ensure that this is the case, certain criteria are to be determined.

I will paraphrase Hilary in her summation of the above.  Too many oldies? Too many Trads? You’re done.  And you may not recruit from other countries.

There is actually so much more to this story and I cannot do it justice in this short treatment.  Traditional Catholic monasticism is done.  It cannot and will not survive this onslaught, if nothing changes.

Step by step they have been destroying avenues for religious to practice traditional Catholicism.  They are simply not giving traditional Catholics with a vocation anywhere to go, except where they want you to go.  They are diligently and systematically cutting off all avenues of escape.  This is critical in understanding my thesis about how they may in the future cause the split in the Church for which Pope Francis has openly pined.

So we have covered a shocking amount of destruction, all documented, that has already occurred.  We have discovered their playbook and we can see how they repeatedly use the same process. In the next installment, we are going to take a look at a recent story that didn’t get much attention.  But I look at it with an eye to all that they have done and extrapolate it further.  This is where things get really interesting.