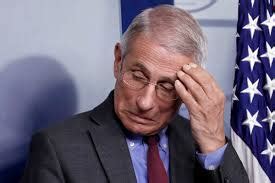 Wow. This really says it all, doesn’t it?

We, as a country, just don’t see things the same anymore. We don’t. And it’s not just that we don’t see it the same. One side seeks to push their viewpoint on the other and if resisted, they seek their ruination. That’s what cancel culture is. Because you’re guilty of #wrongthink, you’re no longer able to work or you’re no longer able to have a Facebook or Twitter page. YOu’re demonetized or kicked off entirely.

I truly don’t understand how Fauci can continue speaking out of both sides of his mouth about so many issues and still retain the trust of so many. So much of what he says flies in the face of reality.

Now, he’s saying that even if you get the vaccine you should continue wearing the mask. For how long?

But Fauci is just a symptom. He’s not the real problem. It’s just that some people prioritize security over freedom. That’s their choice. The problem is that their choice becomes our reality. I wonder how long this can continue.