Awww. The Media is Worried For the Catholic Church. 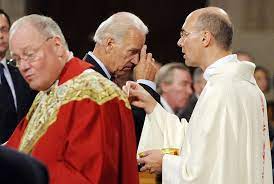 I’m so tired of this garbage. They write this as if they’re concerned that the Catholic Church has made a misstep that could affect its future. Believe me, if these animals believed this was bad for the Church they’d be cheering it.

Here’s a good rule of thumb. If the news media is acting like they’re concerned that the Church is making an mistake the Church is probably doing the right thing. If the NY Times is concerned for the Church, things are going well.

Here’s the thing that they don’t understand. Church teaching is not based on polling. It doesn’t matter what many Catholics believe. The Church’s teaching is that life IS sacred. Life IS a gift from God. That fact is not something that can be polled away.

The piece is garbage. It speaks to a number of Catholics, none of whom are pro-life. They’re all very very troubled (brows furrowed) that the Church is imposing its personal beliefs on politicians. Idiocy. Oddly, the reporter wasn’t able to locate any pro-life Catholics. Maybe the reporter should’ve tried waiting outside a Mass.