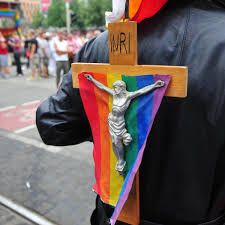 A Catholic school in Alaska is being dragged over its decision to refuse to re-enroll a transgender student with a pentagram drawn or tattooed on her wrist whose social media post was incompatible with the Church’s teachings.

All the usual suspects, including Fr. James Martin, the news media, and New Ways Ministry pounced. (Of course.)

They all chose to act as if the Catholic school just hated transgender children.

Holy Rosary Academy rising senior Morgan Smith began to self-identify as a transgender male in April. Her parents met with the principal, stating later in the summer that Smith’s pronouns and uniform officially be changed in accordance with her new gender identity when they didn’t hear back from school officials.

Notably, the 2021-2022 enrollment packets sent out to Holy Rosary Academy parents contained a new provision that parents and students would adhere to the Nicene Creed and a section titled, “Statement on Marriage, Gender, and Sexuality” that said, “Therefore one’s biological gender is established by God and cannot be changed…”

When Smith’s step-father and mother attempted to re-enroll their daughters, they realized that Morgan and her sister were taken off the school’s rolls. Morgan’s parents asked the school about the decision and principal Mark Newcomb responded that the two sisters were disenrolled because of a social media post that Morgan had made on Instagram. In the post, Smith had posed with a pentagram on her wrist and stated in the caption that devils weren’t real.

“Given the fact that you think, as you state in your note to me, that images and language of this kind are acceptable content for a Holy Rosary student to share online, we clearly do not have a functioning partnership with you for building up the Catholic culture of the school. For that reason…you will need to find other educational options for your children next year, in a setting that better aligns with the values that you hold and espouse with respect to the occult and the diabolical. It is the clear, public, and consistent teaching of the Catholic Church since the days of Christ’s earthly ministry and His casting out of demons, that the forces of darkness are real.”

“Names, pronouns, and uniforms for students of any gender identity, but in particular for those who are trans or gender non-conforming should not be sticking points at Catholic schools. This story could have been about how one Catholic school helped a transgender student flourish…”

There are several problems with Shine’s and the Anchorage Press’s analysis of the school’s decision. One practical issue being that they refuse to accept the fact that the school didn’t dis-enroll the student because of her transgender identity.

The school dis-enrolled the student because of a social media post made by the student on the issue of demons and pentagrams. The Catholic faith often associates pentagrams with freemasonry, an ideology incompatible with the Church according to the Congregation for the Doctrine of the Faith 1983 document, “Declaration on Masonic Associations.”

Church teaching on demons is plain and simple as Newcomb’s email stated and can be found in lines 391 and 414 of the Catechism of the Catholic Church.

However, in the hypothetical, if the school did decide to dis-enroll the student over the gender ideology debate it most likely would have been because her parents demanded that the school violate Church teachings by affirming her preferred pronouns and issuing a boy’s uniform to a biological girl. The school would have had the legal right and the theological duty to disenroll the student solely because her parents were forcing the school to accommodate an ideology that goes against official Church teachings, not because of her struggle with gender dysphoria.

Look, this kid has a rough road. Obviously she’s struggling. My heart goes out to her. Truly. But a Catholic school has a responsibility to remain Catholic. The school administrators have a duty to God and to the children. Their job is not simply to affirm everything the students say. Parents send their children to Catholic school because they believe that their children have something to learn from Catholic teaching. Increasingly it seems that many parents believe that the children are the ones teaching the school because any and all adults needs to be shepherded along and tutored in the ways of the woke, doncha’ know.

Pray that Catholic schools have the courage to be Catholic.