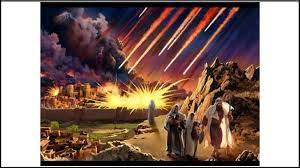 I’m a big fan of stories about archaeologists digging up something that proves that the Bible is history like when archaeologists found The Pilate Stone which corroborated Pilate’s existence. Or when archeologists discovered the Siloam Pool where the Bible said Jesus healed the blind man. Before its discovery, the pool was believed to be non-existent. Why? Because it makes it easier to believe that Jesus didn’t exist and that he performed no miracles.

This story is only that latest. It’s about archaeologists and scientists finding evidence that is leading some to believe is evidence of the destruction of Sodom.

Scientists believe they have found physical evidence that an exploding space rock could have inspired one of the most infamous stories in the Bible, archaeologist Christopher R. Moore wrote, Yahoo News reported.

Scientists may have found proof of an icy space rock hurtling through the atmosphere at about 38,000 mph toward the ancient Biblical city Sodom, now called Tall el-Hammam, roughly 3,600 years ago, Moore wrote. The Bible describes the destruction of an urban center near the Dead Sea, with stones and fire falling from the sky.

The discovery is the result of 15 years’ worth of excavation work, Moore wrote. Scientists suspect a firestorm led to the city’s destruction due to the presence of a roughly 5-foot-thick jumbled layer of charcoal, ash, melted mudbricks and melted pottery, called a destruction layer...

Scientists estimate the rock exploded about 2.5 miles above ground, creating a blast around 1,000 times more powerful than the atomic bomb dropped on Hiroshima, Moore wrote. Air temperatures would have then skyrocketed to 3,600 degrees Fahrenheit (2,000 degrees Celsius), setting the entire city on fire.

A massive shockwave would have followed, moving at roughly 740 mph, faster than any tornado on record, demolishing every building and killing all inhabitants, Moore wrote.

They want to relegate the Bible to history so first they must ignore its historicity.

For me to believe in Christ I didn’t need archaeologists to discover Pilate’s plates or the pool of Siloam or evidence of the destruction of Sodom. But there are some for who this might be similar to Thomas being able to stick his hands in Christ’s palm and side.