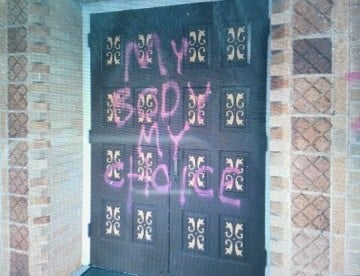 Vandals desecrated the Cathedral Basilica of the Immaculate Conception in Denver, Colorado, on Sunday with satanic messages shortly before the morning Mass, according to reports.

The phrase “love wins” was unironically scrawled on a statue of Pope John Paul II.

Just last month, a Catholic church in Boulder County, Colorado, was vandalized with pro-abortion graffiti in what police described as a “bias motivated” crime. But not a hate crime, huh?

The spray-painted messages included “My body my choice” and “Bans off our bodies.” Vandals also sprayed over the word “Life” on a “Respect Life” garden stone to make it read, “Respect bodily autonomy.”

OK. You gotta’ give some props to polysyllabic hate graffiti, don’t ya’?

According to the United States Conference of Catholic Bishops (USCCB), at least 97 acts of vandalism have occurred against Roman Catholic churches across 29 states since May 2020.

This will likely get worse in the near future. Pray.