The Time Will Come When Serious Christians Must Decide Whether to Stand to Protect Churches and Crisis Pregnancy Centers. 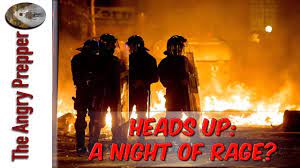 The Department of Homeland Security has issued a warning to Catholic churches and pro-life crisis pregnancy centers to prepare for a “night of rage” by radical pro-abortion terrorist groups upon the release of the Supreme Court’s decision on Dobbs.

So how’s the media responding to this alarming bit of news?

This is the most coordinated & aggressive domestic terrorism in our nation today. All because extremists are angry that they may not get to kill children in the womb, on demand, without limit. Yet there is virtual silence from @JoeBiden, @SpeakerPelosi & most media groups. Why?

Violence against people considered to be on the right side of the political spectrum does not compute. A man shot up a baseball field filled with Republicans and it became a local crime story. A radical leftist ran down Christians in a Christmas parade and it became a story about an SUV.

There is no violence against the right wing. There is only understandable rage of well intentioned leftists.

In the near future it may take serious Christians to stand guard outside churches and crisis pregnancy centers. Those who do so demand our respect. They will certainly need our prayers.