Humane Vitae in the Crosshairs. 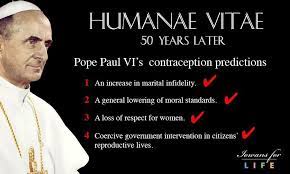 The leftists in the Church are coming for Humanae Vitae. They want contraception to be normalized and therefore all the sexual ethics of Catholicism to crumble into meaninglessness. It is wrong. It is despicable. But they’re doing it right in front of our eyes.

As you know, Humanae Vitae very specifically forbids “any action which either before, at the moment of, or after sexual intercourse, is specifically intended to prevent procreation — whether as an end or as a means” is “excluded,” as an unlawful means of birth control.

Is that unclear in any way?

BUT…and this is a big but…there seems to be some who are unclear and those in the some minority seem to be pretty high up in the Vatican.

So, in short, those who you’d expect to be the chief defenders of the teaching are now against it.

The Pontifical Academy for Life, an institution associated with the Holy See but which is not itself a magisterial body, hosted a 2021 seminar on ethics in which a participant discussed “the possible legitimacy of contraception in certain cases.”

A synthesis of the seminar was recently published by the Vatican Publishing House, which has given rise to questions about whether the Church’s teaching on birth control is reformable.

The Pontifical Academy for Life has defended the discussion it hosted of the permissibility of contraception, tweeting Aug. 5 that “History records by Abp. [Ferdindando] Lambruschini confirmed that Paul VI said him directly that HV were not under infallibility.”

Then in an Aug. 8 statement, the academy wrote that “many people on Twitter seem to believe that Humanae Vitae is an infallible and irreformable pronouncement against contraception.”

It noted that “when the moral theologian of the Pontifical Lateran University Msgr. Ferdinando Lambruschini presented Humanae Vitae in a press conference … he stated under the mandate of Paul VI — that the encylical Humanae Vitae is not to be considered part of the infallible pronouncements. Lambruschini stressed that Humanae Vitae did not express a definitive truth of faith granted by ‘infallibilitas in docendo.’”

The statement added that as Archbishop of Krakow, Karol Wojtyła asked Paul VI to define Humanae vitae’s teaching as infallible. “Pope Paul VI did not do it and neither did Pope John Paul II during 26 years of his pontificate,” the academy’s statement said.

You might recall, I think it was in 2017, that Pope Francis terminated the membership of all the members of the Pontifical Academy for Life. No reasons were given. Hmmm. Why would he do that?

It seems that the reason for the termination and handpicking his own membership makes sense all of a sudden. There’s no way the old members would’ve come out in favor of ditching the Church’s longstanding rules on contraception so out they went.

The new members went to work. What’s the first thing that needs to be done? They need to start chipping away at it by claiming that the teaching was never infallible.

Thankfully, there are still some in the Church to push back against this crass leap toward moral chaos under the banner of modernization.

“This suggests that this has always been the teaching of the Church, so it‘s part of the ordinary, universal magisterium,” Father Petri said. “So even if it’s the case that any particular encyclical” such as Humanae vitae “is not infallible, the teaching that it presents is in fact irreformable, because it’s part of the ordinary and universal magisterium of the Church.”

On the other hand, we have Pope Francis saying ridiculous things like “dogma, morality, is always in a path of development.”

Ah, that makes the Ten Commandments, the ten kinda rules that one day through evolution of generations will be decent guidelines for your life if given some nuance.

He also said that you cannot do theology with a “no” in front of it. This from the pope who says ‘no” all the time to faithful Catholics who want to attend the traditional Mass.