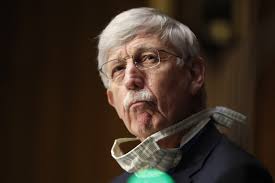 In fact, don’t we already have a government agency doing that? It’s called the Biden Administration. They tell Big Tech and Big Media what the approved opinions are and then they squash that opinion. I don’t know why Francis Collins needs a whole new bureaucracy. They’re squelching dissent pretty well already.

How many of us have felt that jackboot thuggery online? Lots, I’d bet. But not enough for Francis Collins. You must be silenced. He wants an entire government agency working against you spouting your opinions because you’re not him.

Here’s the thing. Ask him how many genders there are? Ask the esteemed scientist when does human life begin?

So, Mr. Brilliance will likely just cough up a meaningless word salad. But if you disagree you’re guilty of misinformation and must be stopped.

“Former National Institutes of Health director Dr. Francis Collins said recently that his biggest mistake during the COVID-19 pandemic was failing to communicate to the public how the government’s recommendations on everything from masking to vaccinations were subject to change constantly.

“The big thing that I know I didn’t do, and I don’t think a lot of the communicators did, was to say, ‘This is an evolving crisis. This is going to change,’ every time we made a recommendation, whether it was about social distancing or mask wearing or vaccines,” Collins said on Sept. 16 at a gathering for the 21st Health Coverage Fellowship hosted by Babson College in Wellesley, Mass. “And we lost their confidence as a result of that.”

Collins, who now serves as a science adviser to the White House, suggested to journalists that a new government agency may be required to improve communications and fight “misinformation,” according to the health news website STAT, which provided excerpts of his remarks.”

These people don’t get it. Their time is over. We no longer trust them. I’m not saying their run in power is done. It’s not. But we no longer believe them. They have weaponized “science” against the people, against truth. We know them now. We see their game. We know their cowardice.