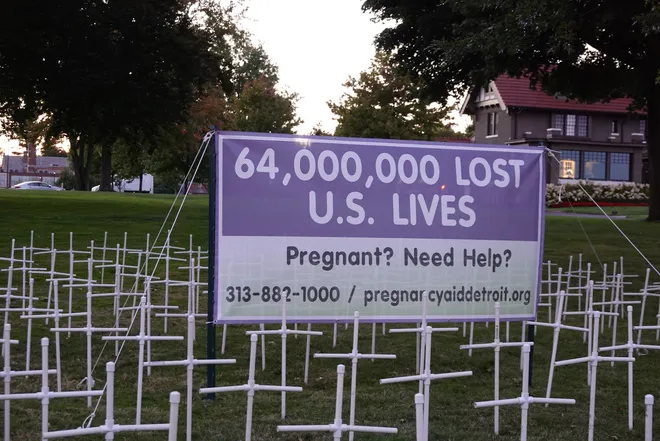 So, the great grandson of Henry Ford drives down Lake Shore Road in Michigan sometimes and he does NOT like seeing a field of crosses commemorating the death of the unborn. No sir, he does not.

In fact, the man who is actually named Edsel Ford, threatened the city that if the town of Grosse Point didn’t do something and pronto about those darn Catholics and their crosses, why…he’d have something to say.

The heir to the Ford family fortune demanded that a local Catholic church in his Detroit-area suburb strip down a pro-life display established to remember the 64 million lives lost to abortion after the 1973 Roe v. Wade decision. The city buckled and ordered the church to modify its signs by trimming down the size.

In a letter addressed to the Grosse Pointe city manager, which was also sent to the reverend of St. Paul on the Lake Catholic Church and the local newspapers, Edsel B. Ford II, the great-grandson of Henry Ford, condemned the memorial as a “blight” on the community.

“Once again, I am writing to you with dismay concerning St. Paul Catholic Church’s use of their front lawn on Lake Shore Road to place signs and crosses advocating their political/moral/ethical position against abortion,” Ford wrote, according to the Detroit Free Press on Sunday. “As one drives down Lake Shore Road, the view and expanse of yards in Grosse Pointe Farms has been a beautiful asset of our City which our community has taken great effort to protect. Signs and crosses such as those erected by St Paul Catholic Church diminish the character of our neighborhood and quality of life for residents and visitors.”

The paper published photos of the display that was made controversial by the local millionaire whose wife, Cynthia Ford, is on the board of Michigan Planned Parenthood.

Ford wrote that unless the memorial was taken down, his family would “proceed to install sign(s) in our yard of the same dimension, expressing our own views.”

So, you see this old brat just gave away the game. He said that he’s against the crosses because they take away from the beautiful view of Grosse Pointe Farms. He says he’s worried about such signs “diminishing the character” of the area. But what’s his remedy?

He will ADD his own signs which would be pro-abortion. So, he’s clearly not worried about diminishing the character of the area at all. So what’s his real problem?

You know it and I know it.

It offends this babbling billionaire bubblehead that Catholics even exist in his rarified air. Remove them at once!

So, of course, the city acquiesced to power and went after the Catholics.

“Our public service director will go out and review the signs that were placed out by the church to make sure they conform with the city sign ordinance,” Reeside told the paper. “The signs are located in the community service district, so the sign requirements are a little bit more expansive than they are for the residential area.”

The church told the Detroit Free Press that the “parish has carefully followed pertinent laws and city ordinances when assembling lawn displays, including this year’s collection of crosses, a message offering assistance to pregnant mothers, and a sign sharing our position on Proposal 3.”

The church was ultimately ordered by Reeside to trim one of the signs into compliance with municipal code restricting billboard sizes. The display will also be taken down on Wednesday as originally planned to comply with city codes on temporary demonstrations.

In November, Michigan residents will decide on the statewide ballot measure “Proposal 3,” which would amend the state constitution to enshrine so-called abortion rights into law. The proposal before voters follows the U.S. Supreme Court’s ruling to overturn the 1973 decision in Roe v. Wade, marking a generational achievement for the pro-life movement.

Ah, you see that’s the thing. There’s a big vote coming up on abortion and ol’ Edsel doesn’t want the peons being reminded that life is sacred, even the lives of the non-billionaires and heirs. And he’ll have a word or two for you if you say otherwise.

Spoler alert: This is how the elites feel about you. Good ol’ Edsel was just dumb enough to say the quiet part out loud.