How Can You Not be Romantic About Baseball? Now Batting…Our Dad! 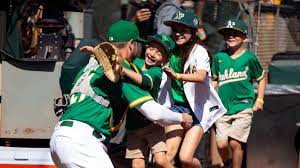 Stephen Vogt, who is reportedly one of the nicest and most genuine guys in the MLB, announced his retirement after 10 MLB seasons. (Being a catcher wears on you.)

On Wednesday, in the last game of the year, before his first plate appearance of his final MLB game, Vogt was introduced at home by his three children.

Check out his utter surprise and joy at hearing his children introduce him.

In his final MLB game, Stephen Vogt's kids announced his name as he came up to bat ❤️ pic.twitter.com/rxtLvtHXVY

And then it happened. In his final at bat of his MLB career, he does this. Check out his joy.

How can you not be romantic about baseball? pic.twitter.com/uJbZztRhbM