Billionaires like Elon Musk want to save civilization with genetically superior kids. Inside the movement to take ‘control of human evolution.’ 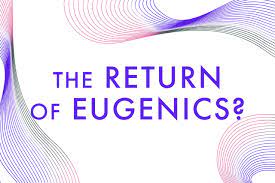 Hmmm. Taking control of human evolution. Where have I heard that one before?

Remember just a decade ago, Supreme Court Justice Ruth Vader Gisnburg said why she thought Roe v. Wade was useful. She said, “Frankly I had thought that at the time Roe was decided there was concern about population growth and particularly growth in populations that we don’t want to have too many of.”

Look, if you accept Darwinism and embrace a purely material view of the universe it would go against the #science not to take hold of human evolution and change the species for the better.

Hmmm. Who gets to decide who is better? Ah, there’s the rub. And what is better?

And does the fact that we have an imperfect understanding of the consequences of genetic manipulation play any role here whatsoever? Are we willing to allow people to be guinea pigs in a worldwide experiment?

The past two years with Covid vaccines would say yes, we are perfectly ok with that.

There’s also the question of who gets the genetic “tweaking?” Who can afford it? Is it that the rich will be able to afford the experimental procedures and have smarter, stronger, healthier offspring?

Does that lock the poor into being poor?

These are all questions that should be asked. They won’t be.

Check out this snippet about a couple who harvested eggs and sperm and went through rounds of IVF:

The Collinses’ top priority was one of the most disputed categories: what they called “mental-performance-adjacent traits,” including stress, chronically low mood, brain fog, mood swings, fatigue, anxiety, and ADHD.
The tests they performed also provided a risk score for autism, a diagnosis Simone herself has received, which they decided not to take into account. Simone compared her autism to a “fine-tuned race car”: Even if she struggles with certain “real-world” situations, she said, “If I’m on the track and I have my pit crew and I have the perfect fuel—”
“—she can dramatically outcompete other people,” Malcolm said, finishing her sentence.
“I’m also really hesitant to select against any type of extreme mental peculiarity in a person,” he added. “Unless it has to do just with severe low function.”
With a large number of green columns and a score of 1.9, Embryo No. 3 — aka Titan Invictus (an experiment in nominative determinism) — was selected to become the Collinses’ third child.
Even with all that planning, the Collinses may not be striking genetic gold. The field of behavioral genetics, which assumes a connection between genes and character traits, is heavily contested — if not outright rejected for its dangerous societal implications. “It’s not clear how much genetics contributes to many of the things that they’re looking for,” Hank Greely, a Stanford Law professor who wrote “The End of Sex and the Future of Human Reproduction,” told me.
Arguments that trace mental aptitude back to genetics are particularly controversial. Hsu, the Genomic Prediction cofounder, was forced to resign from his position at Michigan State University after the graduate-student union claimed Hsu believed “in innate biological differences between human populations, especially regarding intelligence.” (Hsu responded to these allegations by saying: “If the GEU made the claim in your quote, they misrepresented my beliefs. I am quite explicit in my writing and in interviews that we do not know whether there are genetic group differences in intelligence between different ancestry groups.”) Simone said two PGT-P startups planning to test for the “fun stuff” were fundraising in stealth mode because “they anticipate being essentially canceled as soon as they go public.”
The Collinses themselves have been called “hipster eugenicists” online, something Simone called “amazing” when I brought it to her attention.
Malcolm’s “going to want to make business cards that say ‘Simone and Malcolm Collins: Hipster Eugenicists,” she said with a laugh.
“It’s funny that people are so afraid of being accused of Nazism,” when they’re just improving their own embryos, Simone added, after noting that her Jewish grandmother escaped Nazi-occupied France. “I’m not eliminating people. I mean, I’m eliminating from my own genetic pool, but these are all only Malcolm and me.”

What about those fertilized eggs that don’t meet their standards? To the fridge with them!!!

The refrigerator is the gulag for the unborn.

These folks are very concerned about falling birth rates. But they are secular. This couple consider themselves “secular Calvinists.” They don’t like God much but they certainly do like thinking there is a chosen group of saved or elite people. Of course, they are among the chosen elite.

This is a dangerous game. It ends badly.