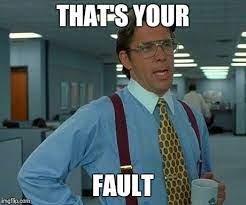 Who could’ve guessed it?

Axios reports: The public defenders for the suspect in the mass shooting at a Colorado Springs LGBTQ nightclub said in a Tuesday night court filing obtained by a New York Times reporter that their client is nonbinary and uses they/them pronouns.

Oh, they just made it likely because this guy who actually did it took his orders from homophobes like Candace and Trump.

To be honest, when we didn’t hear anything about his motive for two days I kinda’ started suspecting that the media would once again land flat on their faces. And that’s what happened.

So, armed with that one little factoid, the media and many in the news and entertainment industry told people that if they opposed drag shows for kids or opposed the LGBTQ community’s agenda in any way, they too were creating the next shooter.

Now, once again, just as in the Pulse shooting in Florida, all of their allegations and accusations against Christians and conservatives came to nothing. That won’t stop them from doing it in the future but we should keep pointing it out when they do it.

There is just something so ghastly about these people attempting to score political points in the hours after a terrible shooting. They are ghouls who will use anything and anyone to advance themselves and their agenda.