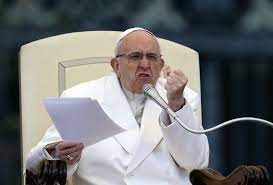 Semantics! The favorite game of Jesuits.

LifeSiteNews.com: In a new interview with America Magazine, Pope Francis upheld the humanity of our unborn brothers and sisters but refused to say that they were, well, people.

On abortion, I can tell you these things, which I’ve said before. In any book of embryology it is said that shortly before one month after conception the organs and the DNA are already delineated in the tiny fetus, before the mother even becomes aware. Therefore, there is a living human being. I do not say a person, because this is debated, but a living human being. And I raise two questions: Is it right to get rid of a human being to resolve a problem? Second question: Is it right to hire a “hit man” to resolve a problem? The problem arises when this reality of killing a human being is transformed into a political question, or when a pastor of the church uses political categories.

It seems to me that he’s the only playing politics here. What theological distinction is he making between a “person” and a “living human being.” That is purely a political distinction. In reality, he’s making a distinction without a difference. He claims to be trying hard to not talk about politics and by doing so talks politics.

In reality, I think politics is Pope Francis’ wheelhouse. He can’t seem to stay off the subject for very long. If a month goes by without some political comment, be sure he’ll hop on a plane, hold an impromptu presser, and say something outrageous and political, all while claiming to be non-political.

It’s the same way he attacks those in the Church he doesn’t like. He claims they are the attackers and he calls them every name in the book and excoriates them for name-calling.