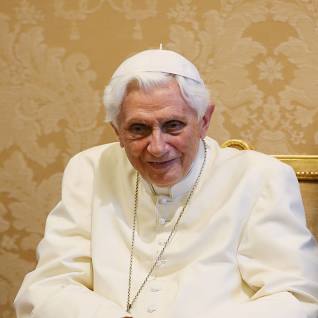 Ceremony for the conferment of the Degrees Honoris Causa to Pope Emeritus Benedict XVI (Joseph Ratzinger) from the Pontifical University of St. John Paul II and its Music Academy in Krakow. Foreground of the Pope Emeritus seated. Castel Gandolfo, Italy. 4th July 2015 (Photo by Grzegorz Galazka\Mondadori Portfolio via Getty Images)

I cold be wrong but I highly doubt that Pope Benedict’s new book is a scathing attack on Pope Francis. I haven’t read it yet but that’s what The Telegraph is pushing here. What it is, however, is likely a refutation of many of the practices of modern Catholicism.

Pope Benedict SVI warned that seminaries are on the “verge of collapse.” That’s not a pointed attack on Francis but a statement about where the Church has been heading for decades. Years ago, I’d heard of seminarians kicked out for being too conservative or for saying the rosary too often.

Is anybody truly shocked that seminaries have “gay clubs?” No. The disgraced Cardinal McCarrick was the head of the Church in America for years. His acolytes still run a great deal.

Gay “clubs” operate openly in Catholic seminaries, the institutions that prepare men for the priesthood, the late Pope Benedict XVI has claimed in a posthumously published book scathing of Pope Francis’s progressive agenda.

In a blistering attack on the state of the Catholic Church under his successor’s papacy, Benedict, who died on Dec 31 at the age of 95, said that the vocational training of the next generation of priests is on the verge of “collapse”.

He claimed that some bishops allow trainee priests to watch pornographic films as an outlet for their sexual urges.

Benedict gave instructions that the book, What Christianity Is, should be published after his death.

It is one of a handful of recent books by conservative Vatican figures which have poured scorn on the decade-old papacy of Francis, who was elected after his predecessor’s historic resignation in 2013.

The outpouring of new books contributes to “impressions of a mounting civil war in the Church following the death of Benedict XVI”, according to John Allen, a leading Vatican analyst who writes for Crux, the Catholic news outlet.

The existence of “homosexual clubs” is particularly prevalent in the US, Benedict said in his book, adding: “In several seminaries, homosexual clubs operate more or less openly.”

Benedict, whose conservative position on doctrinal matters contrasted with Francis’s more compassionate approach, complained that his previous books were regarded as dangerously traditionalist by some elements of the Church.

“In not a few seminaries, students caught reading my books are considered unworthy for the priesthood. My books are concealed as dangerous literature and are read only in hiding.”

I believe every word of what he’s saying. But it’s not merely a Benedict/Francis thing as the media enjoys making it out. This is far more serious. This is where the Church has been heading for decades. We are gleefully racing towards relativism and moral anarchy. God help us.