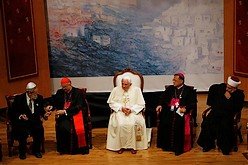 Something tells me this might become a big deal. I’m pretty proud of Pope Benedict XVI for leaving if the reports are accurate. It seems that a high ranking Muslim cleric may have commandeered the microphone just after Pope Benedict’s speech to yell and scream about how awful Israel was.The Jerusalem Post reports:

In an impromptu speech, delivered in Arabic at the Notre Dame Pontifical Institute in Jerusalem, Sheikh Tayseer Tamimi, chief Islamic judge in the Palestinian Authority, launched a 10-minute tirade against the State of Israel for confiscating Palestinians’ land and carrying out war crimes against the residents of Gaza.

He also called for the immediate return of all Palestinian refugees, and called on Christians and Muslims to unite against Israel.

Tamimi invoked the name of Saladin, the Muslim sultan who recaptured Jerusalem from the Crusaders in 1187. Tamimi said that unlike Israel, Saladin upheld the religious freedoms of all faiths.

Following the diatribe and before the meeting was officially over, the pope exited the premises. However, he shook Tamimi’s hand before walking out.

The Pope, speaking before Tamimi, discussed the importance of religion and truth for the advancement of humanity’s mutual understanding.

The pope left the room immediately after Tamimi was done speaking, passing on the traditional exchange of gifts. This will be interesting to see how this is reported. It has two things working against it. The media doesn’t like to report Islamists acting crazy. And it definitely doesn’t like the Pope.

But I wonder if Muslims will take great offense at this. We’ll see.