Maybe Ginsburg Was Napping When Human Dignity Was Being Discussed 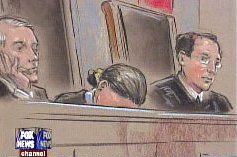 Strange we never saw this at the time.

According to the Associated Press, Justice Ruth Bader Ginsberg snoozed during oral arguments today over political redistricting in Texas.
“The subject matter was extremely technical,” notes AP writer Gina Holland, “and near the end of the argument Justice Ruth Bader Ginsburg dozed in her chair.”
During a report by Megyn Kendall of Fox News, an artist’s sketch of the hearing was aired with Ginsburg’s head using the bench as a pillow.
There was no word if there was any audible snoring echoing through the esteemed chamber, but the sleep session was noticed by Ginsburg’s colleagues who made a snap judgment to let their associate continue her slumber.
“Justices David Souter and Samuel Alito, who flank the 72-year-old, looked at her but did not give her a nudge,” writes Holland.
The incident caught the attention of Washington Post columnist Dana Milbank, who writes:
“At first, she appeared to be reading something in her lap. But after a while, it became clear: Ginsburg was napping on the bench. By Bloomberg News’s reckoning – not denied by a court spokeswoman – Ginsburg’s snooze lasted a quarter of an hour.