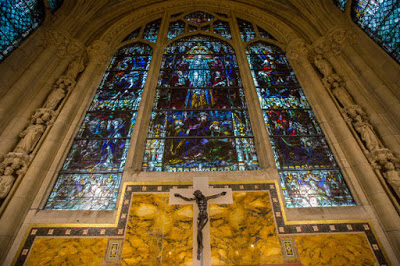 This from the sola scriptura people.

A 250 pound bronze statue of Christ as a woman on the cross is being installed in an Episcopal Church. Oy.

To be clear, it was made decades ago by some nutjob but the Episcopal bishop rejected it at time, calling it “theologically and historically indefensible.”

Ah, but that was before the Episcopal Church became theologically and historically indefensible. (As if they always weren’t.)

Indeed, the current bishop of the Episcopal Diocese of New York, Andrew M. L. Dietsche, wrote about the statue, saying “In an evolving, growing, learning church,” he wrote, “we may be ready to see ‘Christa’ not only as a work of art but as an object of devotion, over our altar, with all of the challenges that may come with that for many visitors to the cathedral, or indeed, perhaps for all of us.”

I love how people use the term “evolving” now. It always means that we’re just making it up as we go along. It also always seems to indicate swimming with the current. You know what happens to things that just go with the current, right? They eventually get washed out to the sea.