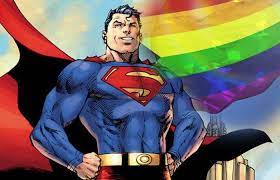 “Breaking news from the world of comic books — Superman may be gay.

Pink News reports that DC Comics is going to kill off the Clark Kent character and turn the cape and tights over to his son – Jonathan Kent. According to a number of media sources – Jonathan Kent will come out of the phone booth.

“I just found out, I got a little bit of a scoop about what DC’s plans are. Nobody knows this, yet. It hasn’t really been announced, except by me. The plan is that… Superman’s book… I guess Clark Kent is going bye-bye,” said DC Comics artist Ethan Van Sciver on his popular ComicArtistsPro Secrets YouTube channel.

It’s part of a trend in the comic book industry — turning established and beloved superheroes into woke, social justice warriors.

In recent days DC Comics announced that Batwoman was a lesbian. AquaLad was gay. And Robin – the Boy Wonder – was bisexual.

Now some of you might be wondering why this is such a big deal. But it’s not just about comic books. It’s about a radical group of sex and gender revolutionaries who are shoving an agenda into the minds of innocent children.

And now the man who was more powerful than a speeding bullet has been felled — not by kryptonite — but by the Rainbow Flag.

Again – unconfirmed reports from DC Comics – but don’t be surprised if the Man of Steel ditches Lois Lane for Jimmy Olson — or the Boy Wonder.”