Actual Headline: “Why Satanists may be the last hope to take down Texas’s abortion bill.” 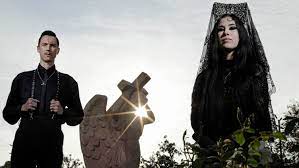 That’s an actual headline from Fortune Magazine. Actually, is it any surprise that the media would view this issue in exactly this manner? Think about where we are. The media (and the left) view pro-lifers as such an enemy that Satanists are their ally, if not their friend.

Let’s be honest. If your last hope is Satan, you have no hope.

Now, normally I wouldn’t link to such asshattery but the story and headline are so unbelievable that I didn’t think you’d believe me.

But this might just be so par for the course at this point. Anything and everything is believable in the 21st century. The argument seems to be that the satanists do sooooooo enjoy their little abortion rituals that they believe that Texas’ anti-abortion law imposes on their religious liberty.

Fortune: “The state of Texas, with approval from the U.S. Supreme Court, instituted the most draconian set of anti-abortion laws in the last 50 years this Tuesday. While pro-choice advocates scramble to save what’s left of Roe v. Wade, their salvation may come from an unexpected place: The Satanic Temple.

The nontheistic religious group, based out of Salem, Massachusetts, has filed a letter with the U.S. Food and Drug Administration arguing that their members should be allowed to access abortion pills without regulatory action. The temple is attempting to use its status as a religious organization to claim its right to abortion as a faith-based right.

The group argues that they should have access to the abortion pills Misoprostol and Mifepristone for religious use through the The Religious Freedom Restoration Act (RFRA) which was created to allow Native Americans access to peyote for religious rituals. Under these rules, the Temple is arguing that they should be granted those same rights to use abortifacients for their own religious purposes.

“I am sure Texas Attorney General Ken Paxton—who famously spends a good deal of his time composing press releases about Religious Liberty issues in other states—will be proud to see that Texas’s robust Religious Liberty laws, which he so vociferously champions, will prevent future Abortion Rituals from being interrupted by superfluous government restrictions meant only to shame and harass those seeking an abortion,” wrote Satanic Temple spokesperson, Lucien Greaves in a statement.

Satanists hold bodily autonomy and science sacrosanct, he said, and abortion “rituals” are an important part of those beliefs. “The battle for abortion rights is largely a battle of competing religious viewpoints, and our viewpoint that the nonviable fetus is part of the impregnated host is fortunately protected under Religous Liberty laws,” he added.

Last year the Supreme Court refused to hear a case from Satanists to overturn Missouri’s abortion laws, but the group is hoping that an appeal to the federal government could make a difference.”

Now, I really want you to think about this for a moment. Do you KNOW which way the US Supreme Court would rule on this? I don’t. Well, if I had to guess I’d bet Chief Justice John Roberts would side with them.

Imagine along with me a scenario. Say they win. Yup. The satanists win in the court. Not out of the realm of possibility. So then women seeking abortion as well as abortionists in states with such a law would literally have to declare themselves Satanists in order to receive the exemption. How many would?

I’m betting that not one abortionist would shy away from that. Pretty telling.